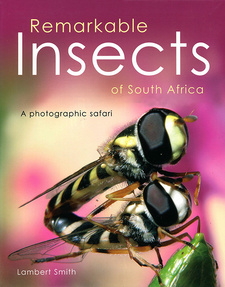 Little did author of Remarkable Insects of South Africa, Lambert Smith, know that this small creature which so fascinated me and which I later learned was called an Amethyst Fruit Chafer with the imposing scientific name of Leucocelis amethystina, would lead him down a path that would keep him occupied with his camera for many years to come. It opened up a world of wonder and fascination that would eventually lead to the publication of this book.

Hemiptera means "half wing" and refers to the fact that the first pair of wings is leathery, hard at the base and membranous at the tips. The word "bug" is often incorrectly used as a collective term to refer to almost anything that creeps, crawls or has more than four legs. The bugs are, in fact, a distinct group of insects that can be identified by specific characteristics unique to Order Hemiptera. They are extremely diverse both in appearance and behaviour with species that have terrestrial, aquatic, semi-aquatic, tree-dwelling, burrowing and parasitic ways of life. In size they range from 1-110 mm in length. As Order Hemiptera is so large and diverse, it is in turn split up into suborders, subfamilies and even superfamilies. Fortunately, we have no need to go into detail except to say that there are two main divisions. The Homoptera suborder includes those species that have uniformly textured wings such as the Aphids, Leafhoppers and other plant-sucking bugs while the Heteroptera includes all the rest. Many of the plant-feeding bugs are of significant economic importance as they are serious pests of several crop plants. They may cause localised injury to plant tissues or weaken plants by removing sap while some also transmit plant pathogens. The Heteroptera is a large suborder with a great diversity of species which are also known as true bugs. It is estimated that there are more than 50 000 species worldwide. Most have wings while some do not. Most are herbivorous but some are carnivorous and suck body fluids of other arthropods or even the blood of vertebrates. Many have glands that release foul-smelling substances. One thing that they all have in common is that they all have piercing-sucking mouthparts encased in a labium (lip) or rostrum (beak or proboscis). They are thus unable to chew material but feed only on plant sap or body juices which they obtain by piercing the food material. When not in use this proboscis is folded back under the body between the legs. Many species have a special groove under the body into which the proboscis fits. Bugs do not undergo a full metamorphosis but develop by incomplete or hemimetabolous metamorphosis and thus have no larva or pupa stage. When young bugs hatch from the eggs they are structurally much the same as an adult except that they do not have wings. Dissimilarity in size, colour and camouflage can make them appear quite different to the casual eye. The young bugs called nymphs then undergo a series of stages in which they shed their outer skin as they outgrow it. This usually takes place from 6 to 8 times depending on the species. During the final stages of growth wings are developed. Accordingly, all bugs which have wings have already reached the adult stage. Some species such as the common bed bug Family Cimicidae) never develop wings. The biology of the reproduction of some bugs, mainly members of suborder Homoptera, is unusual and complex. Some cicadas, for example, spend as long as 17 years underground as nymphs, feeding on roots, before emerging as adults. Some species of plant lice or aphids hatch first as wingless females that are capable of reproducing without males. This is called parthogenesis. After a number of generations winged females are then produced that migrate to different host plants. Only after still more generations and migrations are males and females produced that have the ability to reproduce sexually. [...]

This is an excerpt from the book: Remarkable Insects of South Africa, by Lambert Smith.

This edition of Scorpions of Southern Africa has been freshly designed, updated and expanded.

First Field Guide to Spiders and Scorpions of Southern Africa

Filmer's Spiders Identification Guide For Southern Africa features all 63 families of spider that occur in this region.