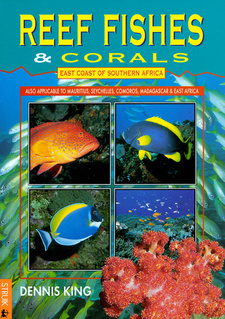 The aim of Dennis King's guide to Reef Fishes & Corals is to provide scuba divers and snorkellers with a compact, basic guide to the identification of the more common reef fishes and corals found in the area from Protea Banks off the coast of southern KwaZulu-Natal to Inhaca Island off the coast of southern Mozambique. The emphasis on fishes and corals is because they represent the most prominent animals observed by divers on most tropical and subtropical reefs. As corals are often neglected in books of this nature, it was considered necessary to include such an identification guide to introduce under-water enthusiasts to the fascinating but complex world of corals. This book is not intended in any way to be a scientific work and, as such, details regarding the structure of fish, the numbers of fin rays, etc. are not given, and only limited information on coral biology and taxonomy is provided. The terminology is also kept simple. Many of the fish and coral species described here have a much wider distribution and occur throughout the western Indian Ocean, including areas such as East Africa, the Seychelles, the Comoros, Mauritius and Madagascar. Some species even occur further afield in the Indian Ocean and the western Pacific Ocean.

How to use Reef Fishes & Corals East Coast of South Africa, by Dennis King:

FISH SECTION
The ease with which species are identified with the aid of this book depends very much on what is known about fishes to start with. Flaving some idea of what the most common and numerous fishes of a particular family look like would make identification much easier. Thus, when there is a spare moment, study the various families and, in particular common fishes such as butterflyfishes, angelfishes, damsels and wrasses. To assist with the identification process, line-drawings of the fish families are displayed on pages 12-1 5. These have been grouped together according to similar characteristics, such as 'silvery in colour or odd-shaped swimmers'.

To identify a fish, first decide to which group it belongs, then look for the family by studying the line-drawings. A page reference refers the reader to photographs of individual species for further identification. Details of each family are given in the text opposite, together with the physical characteristics, distinguishing features, habitat and diet of the individual species. When identifying fishes, try to memorise certain features such as overall shape, colour, patterns and position of spots or lines. Other features may also help, such as the presence of one or two dorsal fins, a round or V-shaped tail, etc. Remember also that the colour of a fish changes with depth.

CORAL SECTION
Before attempting to identify corals it is necessary to understand the different characteristics of the main coral types, that is, hard coral, soft coral, etc. given on pages 104-107.This prior knowledge will greatly assist the diver in identifying the coral type. The next stage would be to identify the coral genus by studying features such as overall shape, variations in growth form, structure and arrangement of corallites, colour and habitat from the photographs of and text on the individual corals. It must be remembered that the identification of corals is a difficult task due to the similarity of many corals and the variations in growth form that can occur within a particular coral genus. Therefore, a good understanding of the subject is essential for accurate identification, says Dennis King.

Snappers are a large family of medium-sized, predatory fishes which inhabit shallow, subtropical and tropical reefs, although the young sometimes live in estuaries. Many are strikingly patterned and coloured, and vary greatly in shape. They occur mostly in shoals, though some larger species may be solitary hunters and cave-dwellers. Feeding habits vary according to species.

Humpback snapper (Lutjanus gibbus)
Attains 50 cm.The body colour of this deep-bodied snapper can change from deep red to silvery white, depending on behavioural mood. Found on shallow coral and rocky reefs, it occurs either solitarily or in shoals. Most active at night when it feeds on plankton and small invertebrates. (...)

This is an extract from the book: Reef Fishes & Corals East Coast of South Africa, by Dennis King.

The Reef Guide. Fishes, corals, nudibranchs and other invertebrates East and South Coasts of Southern Africa

This reef guide documents some 800 reef fishes and invertebrates found along the east and south coasts of southern Africa and the western Indian Ocean Islands.