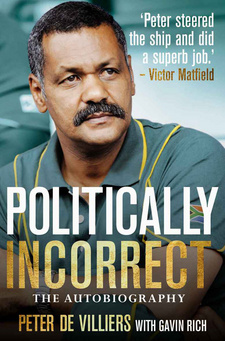 If rugby fans thought they knew Peter de Villiers before reading his autobiography, Politically Incorrect, they will think differently afterwards.

Even the bad days are good

You don't experience much quiet when you are the Springbok coach. So when silence descends on vou, you know it won't last lone. Soon enough, the voice in your head is back: 'Should I perhaps have done that differently? Did I make the right decision?' In 2009, as the team celebrated clinching the Tri Nations with a win over the All Blacks in Hamilton, I chose to sit in silence. Instead of running onto the field to celebrate with the players, as my assistant coaches had urged me to do, I stayed behind to be by myself. I wanted to think. I wanted to reflect on what we had achieved and where we still had to go. These were the players who had won the World Cup two years earlier, and they had now also won a series against the British & Irish Lions and a Tri Nations title, thereby confirming that they were indeed the best team in the world. This was their moment. Like I had done when the South African under-21 team I was coaching won the IRB Junior World Cup in Argentina in 2005, I chose to stand back. Intrinsic to my coaching philosophy is the view that it is not about the coach, it's about the players. The coaches are there only for the players; there would not be any coaches without them. I know when people need me, and they don't need me when they win. When vou go onto the field to join in the victory celebrations, you take the focus away from what has happened in the match. It's the players who play the game, and winning is the just reward for the hard work they've put in. That night in Hamilton, alone for those few minutes before I joined everyone in the changing room, I felt elated. But I also felt a little empty. I had coached the players to get this far, but how would I motivate them for the next challenge? How would I keep them at the top? Two years later, also in New Zealand, I would again sit in an empty coaches' box and speak to the voices that echoed in the silence, and I would recall those minutes I had spent on my own in Hamilton. It was just one memory among many in my four years in charge of the Springboks. This day in October 2011 had been tumultuous for me - and for South African rugby, so I sat in silence as the Regional Stadium gradually emptied under an unusually still and clear Wellington evening sky. This time I was experiencing a scenario quite different from the one in Hamilton. Now there was no point pondering where the Springboks and I would go from here. My journey with the Boks had ended in the cruellest way imaginable, in a World Cup quarter-final we had dominated but which Australia had somehow managed to win. This was the full stop to my career as Springbok coach. There was no point in speculating on what might have been, or on where we had gone wrong. This was the one occasion where you didn't get the opportunity to learn from your mistakes, or were given another day to make up for them. In fact, the next day we were going to board the Boeing 747 that would fly us back to South Africa, to the angry reception that I was stire awaited us. [...]

This is an excerpt from the book: Politically Incorrect: The Autobiography, by Peter de Villiers and Gavin Rich.

The Poisoned Chalice takes a deep look at the the rise and fall of the post-isolation Springbok rugby coaches in South Africa.