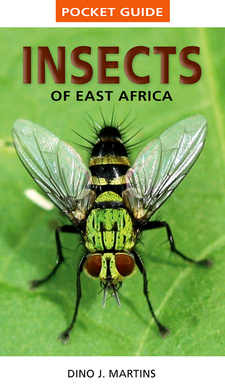 Insects live in the soil, inside both dead and living wood, in water, on every possible plant part and even on or in the bodies of animals (including humans!). There is no other group of organisms that has such an immense daily impact on human lives and livelihoods. Pocket Guide: Insects of East Africa, by Dino J. Martins, Mike Picker and Charles Griffiths, allows an easy access to the complex issue.

Insects are essential for the functioning of virtually all East African ecosystems: they play a vital role in recycling nutrients and energy, breaking down biomass, building and aerating soil, dispersing seeds and pollinating plants. For example, over 80 per cent of all flowering plants depend on insects for pollination. Without bees and other insect pollinators there would be no mangoes, avocados, guavas, apples, pears, plums, papaya, passion fruit, cowpeas or cocoa (chocolate) - and far less coffee would be available in East Africa! In just one area of Kenya alone (Baringo County), bee pollination of watermelons is worth over $10 million per year. It is estimated that we owe one in three bites of food to the services of pollinators, mainly insects. Insects are also responsible for much damage to crops. Locusts, armyworms, aphids, whiteflies and many other pest species take a toll on crops across East Africa. Maize weevils, and other insects that feed on stored grains, impose a heavy tax on our harvests by eating four out of every 10 bags harvested.

How to use the Pocket Guide Insects of East Africa

The species in Pocket Guide Insects of East Africa include those that are frequently encountered, ecologically important or that are simply noticeable. It presents just a first, tiny glimpse of the diversity, ecology and natural history of East Africa's insects. So little is known about most of our insects in East Africa that there is plenty of scope for the public to become involved. Observations, photographs and records of insects shared by the general public and amateur naturalists make an important contribution to our wider understanding and knowledge of what is happening in the field, especially in today's changing world. [...]

NAME: As far as possible, the common English name is given first, as it is often confusing for non-scientists to decipher scientific names. Depending on the classification level of the the particular species entry, a family or order name (in small caps), the name of the genus (in italics) or the full species name (a two-part italicised name) is also supplied.

SIZE: An estimated length from 'nose to tail' is presented. This measurement is from the tip of the insect's head to the end of its abdomen. Wingspans, where known, are presented as a separate measurement for butterflies and moths. As most insects are small creatures, size is a relative measure. Within each group of insects size can vary greatly; for example, East Africa is home to the world's heaviest beetles, goliath beetles, but most beetles are much smaller. The following are the general size guidelines used in Pocket Guide Insects of East Africa: these are very small insects, usually 1-2mm Small: under 5mm 5-25mm Large: over 25mm. Note that if an insect is unusually large or small for its group, this is stated in the text. Size varies naturally and may depend on the quantity of food that an insect has had access to, the temperature during its development, and its sex. In addition, not all insects have been well studied. For these reasons, we have presented the average size for some species, while for others a range is given. [...]

This is an excerpt from the Pocket Guide: Insects of East Africa, by Dino J. Martins, Mike Picker and Charles Griffiths.