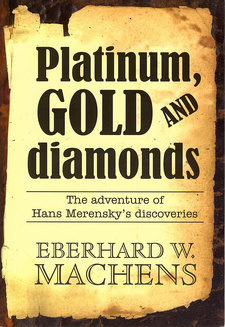 John Gurney's review on Platinum, Gold and Diamonds: The story of Hans Merensky’s discovery, by Eberhard W. Machens, was published in the South African Journal of Science. (Vol. 105 /2009).

Hans Merensky, who lived from 1871 to 1952, is a legend to anyone involved in mineral exploration in southern Africa. His contributions to the development of world-class mines in the Bushveld (platinum group metals and chrome ore); on the southern African west coast for diamonds; and the Phalaborwa carbonatite are well recognised. That he had other less spectacular but important successes, such as a role in developing the Free State goldfields near Odendaalsrus, is one of the many interesting facts that emerge from this entertaining and inspiring biography. Born in South Africa, where his German parents were missionaries, he relocated with his family to Berlin at the age of 11, only to return to South Africa as a fully trained geologist and mining engineer in 1904 at the age of 33. A number of years operating as a successful consultant were brought to a temporary halt by a bankruptcy during a global recession, followed by the further misfortune of being interned at Fort Napier in Pietermaritzburg for the duration of WorldWar I. Consequently when Merensky re-established himself in Johannesburg in 1919 he was 48 years old and starting from scratch. All his major exploration successes were still ahead of him: platinum in the Bushveld (1924); diamonds in Namaqualand (1926); gold in the Free State (1936); chrome in the Bushveld and vermiculite and apatite at Phalaborwa took longer to develop, starting from 1937 but interrupted by World War 2. This prospecting success record is truly staggering, and is unquestionably unmatched in southern Africa, and to my knowledge anywhere else. This account of his achievements is fascinating. Yet chapter 15, titled ‘The turning point in Merensky’s life’, doesn’t deal with his exploration successes, other than to mention that they allowed Merensky to finally pay back all his debts and to purchase the farm Westfalia that was to provide the principle focus for the rest of his life. In all above instances Merensky not only led the exploration initiatives, he fulfilled the entrepreneurial role of raising the high-risk, early-stage funding and the placing of the projects in the hands of appropriate developers. So it was entirely fitting that the last coup of Merensky’s exploration initiatives was to prospect Phalaborwa, and in doing so provide the South African government of the day—and the local agricultural community— with the future Phosphate Development Corporation. I found the biography fascinating for a host of reasons. The early days of Merensky’s life, it would appear, gave him an identity with open spaces and independence. His powers of observation, meticulous record keeping, outstanding memory and discipline were also clearly key attributes in an age when an earth scientist could venture into the field with only simple prospecting aids, and yet have a realistic hope for success. I use the term ‘earth scientist’ advisedly, as Merensky was trained as both a geologist and a mining engineer, and his projects in later life included ones involving agricultural research and development. His endeavours have led to an equally impressive legacy that he was able to mastermind himself: the Hans Merensky Foundation today has over 4 000 employees, offering global research services on agricultural matters and sponsoring student fellowships. [...]

This is a review on Platinum, Gold and Diamonds. The story of Hans Merensky’s discovery, by Eberhard W. Machens.