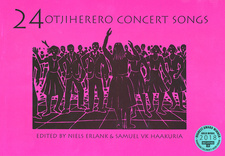 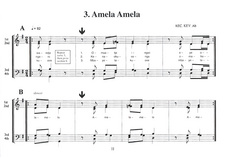 24 Otjiherero Concert Songs, edited by Niels Erlank and Samuel V.K. Haakuria, is Concert II of the Namibian Music Series which forms part of the project Towards a Songbook for Namibian Students.

24 Otjiherero Concert Songs is the second book and CD of a planned Namibian Music Series. The series is primarily designed to be used at schools and so it seemed right to start with two collections of concert songs, Khoekhoegowab (Damara/Nama) and Otjiherero. These songs are, like no others, connected to the daily lives of the youth, at school, in the hostels, in families, and in communities. With the Namibian Music Series, the editors wish to contribute to a systematic documentation of the diverse musical traditions in the country. Students should learn about these as part of their formal education and we sincerely hope that this will promote self-respect and mutual understanding among young Namibians. Looking at school music in Namibia from the 1950s, we see the organisation of school concerts into certain patterns. Through complex intercultural processes, a number of different concert styles have developed in the various regions of the country. On the one hand, South African styles (e.g. Makwaya, Kwela, Mbaqanga) were imitated, on the other, the processes that had led to these South African styles were also taking place in Namibia. Although a detailed history of popular music in Namibia has not yet been written, we can at least list the sources that have had a tremendous impact on the Namibian musical traditions since the beginning of the century and even before. There were the church hymns brought into the country by missionaries, and the boeremusiek; the military brass bands and public choir performances. They formed the first immense bundle of influences. Later, teachers and migrant workers brought the latest styles from the South African cities. Finally, there was the enormous impact of the SABC radio stations, carrying the latest Afro-American and black South African music into even the remotest areas of the country. All these influences on existing local musical traditions led to a number of new Namibian styles. On the instrumental side, there were the Damara Guitar Song, ///w-dance and Namastap styles. For the youth, the konsert (oviritje) or concert song became the most popular form of musical expression after the early 1960s. In the development of concert culture, an important event was the first national conference of the youth leagues of the Lutheran Church, which took place in Okahandja in 1958. On the evening preceding Ascension Day, choirs from each branch competed in a singing competition. This practice is continued to this day, when choir affiliations like Kantate, Soli Deo Gloria or Congregational Choirs have their regional or national conferences and present new hymns (koorliedere) at the sangaand on a Saturday evening. Another important concert-related activity was the sports competition. Every sports team, be it the 'red', 'blue' or 'green' athletics team, or the netball or soccer team, had their own supporting group, which dressed in team colours and sang concert-style supporting songs. From the late 1960s, regional school sports competitions were extended into the evening with a concert, at which the concert groups of the various schools competed. Such events regularly took place in the different regions, such as the Okakarara region, with teams from Okamatapati, Koblenz and Waterberg competing; similarly in the Khorixas region with teams from Uis, Okombahe and Omaruru taking part, and also in the central region, with regular competitions at Dobra and the Augustineum Training College. These events were organised countrywide with the annual national Interschools Sports Competition being the highlight of the year. However, the most important single event in the history of concerts was without doubt the opening of the SABC's first two local radio stations in 1969. [...]

This is an excerpt from 24 Otjiherero Concert Songs, by Niels Erlank and Samuel V.K. Haakuria.

24 Otjiherero Concert Songs is a collection of popular Namibian concert songs on CD and music typsettings.