Of Tricksters, Tyrants and Turncoats, by Max du Preez 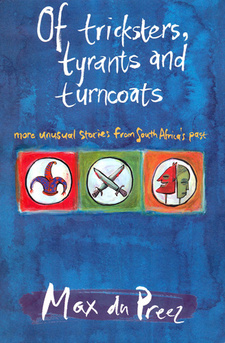 Of Tricksters, Tyrants and Turncoats is a collection of fascinating, colourful and mostly unknown historical tales, all meticulously researched and written in a lively and engaging style by Max du Preez.

EVERY NOW AND THEN, SOMETHING HAPPENS THAT proves graphically how mindless and nonsensical racial prejudice is. There can hardly be a more telling story to illustrate this than that of William Jordan, alias Willem Jordaan, founder of the tiny Boer republic of Upingtonia. William was born to Patrick and Margaret Jordan in Cape Town in 1848 and, according to the Methodist Parish Records of Wynberg, was baptised as William Worthington the following year. Patrick was a British immigrant, but Margaret was a Cape Town girl and, according to some sources, the daughter of a slave woman. William wasn't as pale as his father - during the apartheid years he would have been classified a "Cape Coloured". His parents weren't well off and could give their son no more than a basic education. He didn't seem to need more. He had an unusual thirst for knowledge and read everything he could find. He had a special interest in medicine and some said he knew more of medical matters than some of the quacks at the Cape. But William Jordan had a soul far too restless - and ambitious and adventurous — to be a doctor. He was only twenty-one when he left Cape Town, trekking north and settling at Rehoboth, just south of present-day Windhoek, in Namibia. Rehoboth was home to a group of people of mixed race who had trekked from the south and called themselves Basters. Using Rehoboth as a base, Jordan travelled north into Ovamboland, Kavango, Damaraland, the Kaokoveld and deep into Angola, hunting, trading and observing. Through reports he wrote for newspapers in Cape Town, he opened up these faraway parts to South Africans. By the late 1870s, Jordan was one of the most successful traders in the region spanning the present-day Northern Cape, Namibia and Angola. He was a legendary hunter and with his charismatic and sympathetic personality had made friends all over the place, including among the Portuguese colonial authorities in Angola. It helped that he was fluent in Portuguese, French and Dutch/Afrikaans as well as his mother tongue, English. At the age of thirty, Jordan was wealthy enough to start having very ambitious dreams of opening up the whole of the western subcontinent to trade, from the Cape all the way across the Gariep and Kunene rivers to Luanda, capital of Angola - a vision not unlike that of Cecil John Rhodes for the central regions of Africa. But instability in central Namibia threatened to thwart Jordan's plans for trade between the Cape Colony and the areas north of the Gariep and the Kunene. The dominant Herero were constantly at war with the Nama from the south. Jordan tried his hand at brokering peace between the two groups but eventually gave up, working instead on an idea for the war-torn areas of Namibia to be "civilised", if needs be by people from outside, by which he meant white people. When Jordan met a group of white trekkers in northern Namibia in 1878, he thought he had found the people who could be settled alongside the Basters to form a buffer between the Herero and the Nama. The Basters and these trekkers spoke the same language, a creolised version of Dutch called Afrikaans. The trekkers were participants in what became known as the Dorsland (Thirstland) Trek. To understand this rather bizarre chapter in our history, we have to go back a few years before 1878. [...]

This is an excerpt from the book: Of Tricksters, Tyrants and Turncoats, by Max du Preez.