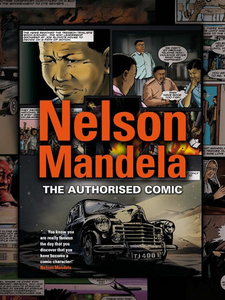 This is an excerpt from the the authorised comic about the life of Nelson Mandela. It was created by the The Nelson Mandela Foundation.

This book began as a series of eight comics distributed free by the Nelson Mandela Foundation in partnership with comic publisher Umlando Wezithombe between 2005 and 2007. The series was a project of the Foundation's Centre of Memory, and was aimed at reaching young South Africans with the story of the life and times of Nelson Mandela, in accessible form. The series drew on a wide range of published work, but also made use of previously unused archival material as well as formal and informal interviews with individuals who appear as characters in the story. We are particularly grateful to Ahmed Kathrada, who acted as special advisor to the series and also assisted with the preparation of this book. His contribution has been immeasurable. The series was made possible financially by a number of generous donors and sponsors-Anglo American, BHP Billiton, the Ford Foundation, GTZ, Independent Newspapers, the Nelson Mandela Legacy Trust (UK), E Oppenheimer and Son, Sasol, and Staedtler. The Centre of Memory team has relied heavily on the research expertise of Sahm Venter for both the series and this book. Others who have contributed are Anthea Josias, Shadrack Katuu, Boniswa Qabaka and Razia Saleh. Lull Caliinicos acted as a consultant for the first five comics in the series. The Umlando Wezithombe team has been marshalled by Nic Buchanan, and has comprised: Scriptwriting and research: Santa Buchanan and Andrew Smith Storyboarding: Santa Buchanan and Pitshou Mampa Illustrating: Pitshou Mampa, Pascal 'Freehand' Nzoni and Sivuyile Matwa Inking and colouring: Richie Orphan, Pascal Nzoni, Sivuyile Matwa, Jose 'King' Jungo, Pitshou Mampa and Sean Abbood. The Centre and Umlando have been supported by an exceptional Jonathan Ball Publishers' team - Francine Blum, Jeremy Boraine, Frances Perryer and Valda Strauss. Key reference works utilised by our researchers are as follows: The World that Made Mandela, Beyond the Engeli Mountains, and Gold and Workers by Luli Callinicos, Drum Magazine, Winnie Mandela - A Life by Anne Marie du Preez Bezdrob, Walter Sisulu: I Will Go Singing by George Houser and Herbert Shore, The Rivonia Story by Joel Joffe, Memoirs by Ahmed Kathrada, Mandela by Tom Lodge, Long Walk to Freedom by Nelson Mandela, Higher than Hope by Fatima Meer, A Fortunate Life by Ismail Meer, Mandela by Anthony Sampson, in Our Lifetime by Elinor Sisulu, A Step Behind Mandela by Rory Steyn, and Portrait of a People by Eli Weinberg. Archival holdings of the following institutions were consulted: Baileys Historical Archives, Brenthurst Library, Historical Papers (University of the Witwatersrand), the National Archives, the Nelson Mandela Centre of Memory, Robben Island Museum and the University of Fort Hare Library. Inspiration for this project, of course, came primarily from Nelson Mandela himself. This is his story constellated by numerous other stories, in a profound way the constellation is the story of the country, South Africa, for which Tata Nelson Mandela sacrificed so much. More than this, Tata gave his blessing to the project, launched it with a rousing speech, and shared his memories. The book is a gift to him in his ninetieth year.

This is the authorised comic about the life story of Nelson Mandela.