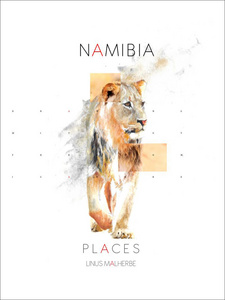 Namibia Places, by Linus Malherbe, also contains artwork, like the watercolour "Christuskirche", commissioned or bought by collectors, who’s names are referenced throughout.

Perched conspicuously on a rise close to the Tintenpalast, the dignified Christuskirche is the oldest Evangelical Lutheran church in Namibia and probably the most prominent landmark in Windhoek. While it was built in the neo-Romantic style with strong Gothic and Art Nouveau influences, the ornamental side gables and rounded windows are typically Jugendstil. The imposing church overlooks the capital towards the west and was declared a national monument in 1974. Designed by Government Architect Gottlieb Redecker, the Christuskirche was built by the colonialists in the wake of their wars with the indigenous Khoikhoi, Herero and Owambo people. Architect Redecker was one of the first students to attend the renowned Augustineum Secondary School established in 1866. In later years the sons of the famous Herero Chief Samuel Maharero also went to school there. In the period following the wars, the Christuskirche was referred to as the Church of Peace. Following the death of his mother when he was 11, Gottlieb Redecker was sent to Germany, where he completed his secondary education and went on to study engineering. As a result of his long residence abroad, he lost the German citizenship he had inherited from his father and was classified as a Damara by the German administrators. Despite his long absence, Redecker spoke both Damara and Herero fluently. He returned to Germany in 1921, retired in 1931, and was killed by the Allies on 21 January 1945 during an air raid. While the site for the Christuskirche had been allocated in Qj 1898, the foundation stone was laid only on 11 August 1907. Construction work was completed on 16 October 1910. By this time the building costs had escalated to double the 360,000 German Marks originally allocated. All the building materials were mined locally in the vicinity of today's Avis Dam. A small railway line was built to transport them to the construction site. The portico of the Christuskirche consists of Carrara marble imported from Italy. Although built in a neo-Romanesque style, the 42-metre-high tower was topped by a Gothic spire. The clock and part of the roof were shipped from Germany, as well as the three bronze bells cast by Franz Schilling. They bear the inscriptions Ehre sei Gott in der Hdhe (Glory be to God in the Highest), Friede auf Erden (Peace on Earth), and Den Menschen e/'n Wohlgefallen (Goodwill towards Men). During a confirmation service in 1960, the clapper of the main bell became unhinged, smashed through the window and fell onto the street. Window bars were installed to prevent this from happening again. The colourful stained-glass leaded window in the sanctuary was a gift from Emperor Wilhelm II. The original altarpiece, a copy of Ruben's famous painting Resurrection of Lazarus, was moved to the gallery in later years. The copy was made by Berlin artist Clara Berkowski and donated by the wife of Governor Theodor Seitz shortly before WWI. Regrettably the original Ruben painting was destroyed in Berlin in 1945, making the copy in the Christuskirche the only one left in the world. The Christuskirche was renovated from 1967 to 1972, which included replacing the corrugated iron roof with tiles. On one of the interior church walls there is a bronze plaque listing the names of German soldiers, marines and civilians killed during the Nama and Herero uprisings in 1903 to 1907. Halfway down the hill from the church towards the centre of town there is a right turn into Judge J.P. Karuaihe Street, the former Luderitz Street. [...]

This is an excerpt from Namibia Places, by Linus Malherbe.