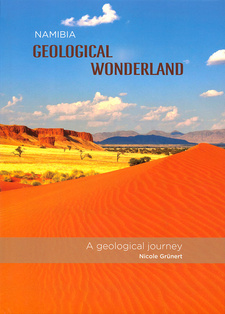 Nicole Grünert’s book, Namibia: Geological Wonderland, introduces geological eras and selected geological phenomena and show where evidence of them can be found in Namibia.

Namibian mines and minerals: Treasures from the inner earth

Just a mention of "Namibia" is enough to excite mineral collectors from all over the world. This is not only because of the diamonds, which qualitatively are among the best in the world, nor the famous Tsumeb Mine in the Otavi Mountains, which is well known to crystal collecters. There is a wide variety of treasures to be found. The oldest signs of mining in the country date back some 400 years. Remnants of basic copper smelters occur in the vicinity of Matchless Mine west of Windhoek. Early signs of ore processing have been discov-er-rich Otavi Mountainland, particularly at the "Green Hill" of Tsumeb and in the area of Lake Otjikoto. Metal goods from molten meteorite iron are evidence that the Nama people in the south of the country used fragments of the Gibeon Meteorite Shower (see Chapter 23). During the 19th century mining occurred at several places in the country and intense trading began, mainly with copper. During German colonial times at the beginning of the 20th century the first significant deposits were discovered and a real mining boom began. Construction of the Tsumeb Mine began in 1906 (Fig. 9.1) and other deposits in the Otavi Mountains were also developed. Tin was discovered in the Omaruru District in 1908. The tin occurrence at Uis (Fig. 9.2), which became the largest hardrock tin mine in the world, was described geologically for the first time in 1913. The most spectacular and most consequential mineral discovery occurred during this period when in 1908 the railroad worker Zacharias Levala found the first diamond along the railway line near Kolmanskop in the south. This caused a real diamond rush. Within a short period the entire coastal stretch from Luderitz southwards was dissected by claims. In 1909 the rich diamond fields near Pomona were discovered (Fig. 9.3.a+b). Only four years later about 20 percent of the world's diamonds were mined in an area south of Luderitz. The restricted Diamond Area (Sperrgebiet) was proclaimed in September 1908 to control the chaotic circumstances in the mining areas. The Sperrgebiet included an area between the Orange River in the south, the 26th degree latitude in the north and extended 100 kilometres inland. The old ghost town of Kolmanskop still bears witness to those glorious times (Fig. 9.4). With the onset of the First World War the entire mining sector came to a standstill. Diamond mining, however, was the first to recover from the turmoil of war and by 1915, just before the takeover of the country by the Union of South Africa, the search for these valuable stones resumed. Occurrences of other mineable minerals, such as tungsten, vanadium, tin, fluorite and gold were developed between the two world wars and mined with varying degrees of success (Fig. 9.5). After World War Two a new mining boom began with modern exploration and drilling techniques that revived known deposits such as the Matchless Mine near Windhoek. The rich lead-zinc deposits at Rosh Pinah in the south of Namibia were discovered in 1964 and only a short time later the Skorpion ore body was found. Development of the Skorpion Mine, however, only took place in the 21st century as major ore processing problems had to be solved (Fig. 9.6). Uranium is second in value to diamonds in Namibia. Even though the radioactive rocks around the Rossing Mountain were discovered in 1910, the Rossing Mine only began production in 1973. Rössing Mine is one of the largest open-pit uranium mines in the world (Fig. 9.8). The Husab Mine is under construction very nearby. [...]

This is an excerpt from Namibia: Geological Wonderland, by Nicole Grünert.

Namibia Geological Wonderland: A geological journey for beginners and travellers.

Namibia: Fascination of Geology is essentially aimed at the geologically interested layman and hobby geologist without a scientific background.