Kalahari: Life's Variety in Dune and Delta, by Mike Main 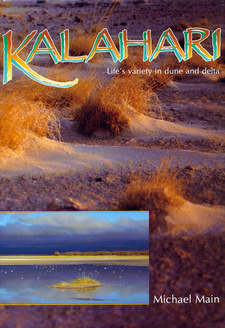 Kalahari: Life's Variety in Dune and Delta, by Mike Main.

In his book Kalahari: Life's Variety in Dune and Delta, Mike Main describes the region of Tsodilo Hills. Of Hills and Hollows - Nothing in one's experience of the Kalahari prepares one for the approach to Tsodilo Hills.

You may fly or drive but either way the first sight of these hills will not fail to evoke a strong feeling of excitement. It may partly be from a sense of achievement in having penetrated to such a remote part of Africa; it may also be amazement at being so unexpectedly confronted with hills in an area otherwise known for the unrelenting flatness of its landscape. For me, however, the excitement comes from the spirit. There is something about those hills that is hard to identify. It is almost as if they have an aura, moving into which somehow sharpens the senses, awakens long forgotten feelings and tells you, unequivocally, that this is somewhere special. The Tsodilo Hills are found in the northwest of Botswana, on the southern side of the Okavango Delta. There are four hills in the group, the largest of which is named, by the local Bushmen, the Male. Its western face, which is solid rock, has a broad base and rises sheer for over 300 m. To the north of it and separated by a small gap, through which a bush track passes, is a conglomeration of smaller summits known collectively as the Female. Beyond that again is a very small hill called the Child and finally, at the end of the group, the smallest hill of all, that is without a name.

The first time I visited these hills I drove there. From Maun it is a long and tiring journey and can take ten hours or more in a four-wheel-drive vehicle. Leaving the main road (a polite euphemism for 200 km of ghastly track along which vehicle tracks are almost totally obscured in deep, soft sand), the rest of the drive takes two or three hours on a bush track. To begin with, the countryside seems without shape or pattern. Unusual for this part of the world, the track is firm with very little loose sand.

The bush is dense and crowds in from either side, scraping against your vehicle as you pass. There are short stretches of Mopani woodland but they lack the attraction of the great Mopani forests further north which, with richer soils and higher rainfall, give a feeling of lightness and airy spaciousness which is not found among these cramped and stunted trees. Just over halfway, however, the environment begins to change and you move into totally different country. Seen from the air, this part of Botswana is covered with line upon line of ancient sand dunes, lying parallel to one another and now fixed in place by vegetation.

They stretch as far as the eye can see and look for all the world like some limitless sea, frozen at a moment in time and forgotten as ages passed them by. It is into this dune country that the track now takes you. The ridges of sand are regular, with about 1,5 km between the crests, which are seldom more than 20 m high. The valleys between have gently sloping sides. When I was there it was the rainy season and nature had been generous. The valley floors were lush with stands of tall fresh grass reaching almost to shoulder height. There were few trees to obstruct the long green vistas down these valleys to the blue beyond. Having recently emerged from the cluttered bush, a feeling of light and space pervaded the day.

The road followed a line diagonally across the old dunes, so that progress was rather like travelling on a roller-coaster. The sand seemed to get deeper and softer as I approached the crest of a dune; the engine began to overheat and I was obliged to change down to the lowest gear. Grinding my way over the gently rounded summit, I began the descent on the other side and then approached the next dune. Interestingly, the dune crests are heavily wooded. Here the trees grow tall and widely spaced, and their spreading branches cast a dancing dappled shade across the white sand.

It is from one of these crests that one catches the first glimpse of the Male hill. You will see its summit looming blue-black above the trees, at once beckoning and suggesting, by its very incongruity and size, the mystery and enigma that is Tsodilo. It will take another hour before you stand below it, awed by its presence. Today two groups of people live permanently at the hills. The first are Hambukushu who live in a small village near the Male hill. They keep a few cattle here, watering them from a deep well they have dug near their dwellings. When the rains are good they will grow a crop of cereals.

A representative of Botswana's National Museum will produce a visitor’s book for you to sign, for the area is protected, and bureaucracy, in the shape of a stubby pencil and sand-smudged pages, must have its way. I think it unlikely that this group has been here very long, a few generations perhaps, but there have been other Hambukushu here before them, with long gaps between periods of occupation. This tribe is found elsewhere in Ngamiland and, if you ask them, they will tell you that their god Nyambi first lowered people of their tribe to the earth at these very hills. […]

This is an extract from the book: Kalahari - Life's Variety in Dune and Delta, by Mike Main.

African Adventurer’s Guide: Botswana is a comprehensive handbook for anyone considering a journey through this magnificent country.

Zambezi. Journey of a river

Wonderfully written impressions and stories of a journey along the Zambezi River.

Gemsbok Bean & Kalahari Truffle introduces to the traditional plant use by Jul'hoansi in North-Eastern Namibia.