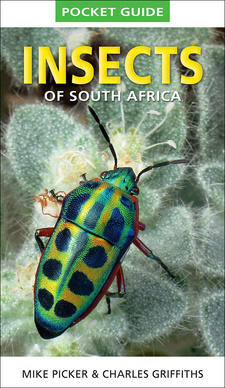 With over 100 000 insects in South Africa, the task of identifying them may seem daunting. The compact, easy-to-use Pocket Guide to Insects of South Africa by Mike Picker and Charles Griffiths features some 431 insects and spotlights a group of intriguing creatures whose rich, complex communities live and work alongside ours.

What is an insect? Insects are a class of animals within a larger group, the phylum Arthropoda, that includes all animals with jointed external skeletons. Arthropods are easily the most diverse animal group, making up 90% of all animal species and dominating most marine, freshwater and terrestrial habitats. Among the many arthropod groups, insects are the only ones to have developed wings. Other features that identify insects are: the division of the body into 3 obvious sections, head, thorax and abdomen, and the possession of 3 pairs of legs and a single pair of antennae. Insects are by far the most diverse arthropod group. Other major arthropod groups potentially confused with insects include the following:

SPIDERS have 4 pairs of legs, no antennae and a body comprised of 2 sections - a fused head and thorax separated by a narrow 'waist' from an unsegmented abdomen. They are well known for their ability to spin silk webs, snares and shelters. All are predatory and a few species are dangerously venomous.

SCORPIONS lack antennae and have 4 pairs of walking legs and another pair of legs that form powerful pincers. The head and thorax are fused, and the elongated, segmented abdomen ends in a distinctive swollen sting. Scorpions are nocturnal predators and some are dangerously venomous.

MYRI0P0DS (centipedes and millipedes) are easily distinguished from insects by their elongate body form, multiple body segments and lack of separation between thorax and abdomen. Legs are present on all body segments except the head. Centipedes are generally flattened and have 1 pair of legs per body segment, while millipedes are usually cylindrical with 2 pairs of legs per segment. Large centipedes can inflict a painful, venomous bite.

CRUSTACEANS (crabs, woodlice and landhoppers) have 2 pairs of antennae and a variable number of legs. They are much more significant than insects in marine systems, but are less common in freshwater and terrestrial ecosystems. Crabs have a fused head and thorax and 5 pairs of legs, the first pair modified into pincers. Woodlice and landhoppers have 7 thoracic segments and pairs of legs (the first 1 or 2 sometimes modified into pincers). Woodlice are flattened (depressed), with short legs, while landhoppers are flattened from side to side (compressed), with longer jumping legs.

The bodies of adult insects are encased in a hard exoskeleton made up of separate plates ('sclerites'), joined together by flexible sections ('pleurites') that allow for movement, much like a suit of armour. As already mentioned, there are 3 main body sections: head, thorax and abdomen. The head is made up of 6 fused segments and carries: 1 jointed antennae, a single pair, of variable length and structure; Eyes, usually prominent compound eyes composed of numerous independent sensory structures ('ommatidea'), visible externally as hexagonal facets, but often also small simple eyes ('ocelli') between the compound eyes, and mouthparts of enormously variable structure. The basic chewing or biting mouthparts can be modified into elongate, tubular, piercing-and-sucking structures (in bugs and mosquitoes), an elongate, coiled proboscis for nectar-feeding (in butterflies and moths), or a blunt suction pad to mop up liquids (in flies). [...]

This is an excerpt from Insects of South Africa (Pocket Guide), by Mike Picker and Charles Griffiths.