I have life: Alison's journey, by Marianne Thamm 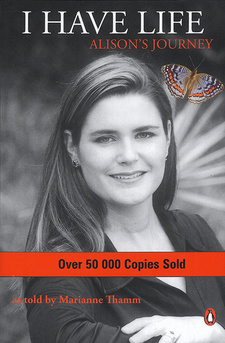 Together, Alison, Tienie and Marianne Thamm have produced 'I have life: Alison's journey' which is a beacon and a beautiful read. The story it tells is unforgettable and the hope that it gives is invaluable. It celebrates a life which was reclaimed, which no one could take away. Alison has given us back our courage too.

IN A TIME and place where violence against women had become pandemic, one woman, still recovering from atrocious wounds to her soul and body, said 'I will not let them take my life away'. It was as if I had been waiting for someone- to say this. The young woman who did was called Alison. She was South African and until that moment had only been remarkable in that when in trouble, other people always reached out to her, a quality inherited from her mother who had instilled in her the need to 'hold your head high' under any circumstances. Alison's warcry inspired Femina to institute a Woman of Courage Award and she became the first recipient. We sent Marianne Thamm to Port Elizabeth to interview her. She was one of the toughest journalists on our team and we knew that not only would she not flinch from a horrific story but that also she had the heart to gain the trust and confidence of someone who was in a shattered and still traumatic state. This was the beginning of a remarkable relationship between the magazine and a heroine who the whole country would take to its collective heart. The actual award had to take place on a Saturday morning and we anticipated a poor turnout from the rest of the press. They turned out in strength and when she spoke, even the most jaundiced of eyes filled with tears. Alison's story reflected a triumphant spirit and an unquenched love of life. This set the tone for the journey that would follow as more and more people called on her to comfort and inspire them. She became the symbol of the survival of the human spirit in South Africa. The golden dove of peace which sculptor Stella Magni had given her as part of the award and which she wore everywhere she spoke sent its own message. Like Nelson Mandela, her most impressive attribute was a complete lack of bitterness. When Alison married Tienie in Knysna, Marianne and I were honoured to be asked and incredibly happy to be there. It was not just that she had found such a good man and that it was such a golden day. It was because when women are violated in their innermost souls it stays with them, sometimes for ever. But on that day, as Alison's remarkable mother said, it wasn't as if it had never happened but it was as if it didn't matter any longer. In fact the brutal attack and rape were hardly referred to. In the most vital sense Alison's attackers had ceased to exist because she had risen far above them and gone past the darkness they represented. That meant that it was time for her to write her book. Despite everything, a book remains the most permanent and valuable testament a person can leave for future generations. Alison's message must travel the world and go into the libraries of a new millennium. To find the words which will make it into a great book she needed a partner in the project. Who better than Marianne who had chronicled the first in-depth account and, finally, the story of her love and marriage? [...]

This is an excerpt from the report 'I have life: Alison's journey', by Marianne Thamm.

I have life: Alison's journey

The triumphant yet true story of a South African woman who refused to become a victim.

The How-to-be a South African Handbook

An Irreverent Cultural Guide for Tourists and Confused Locals