Heart of Africa, by Sihle Khumalo 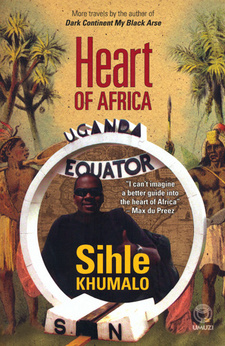 Heart of Africa, by Sihle Khumalo.

Sihle Khumalo’s unfailing eye for the good, the bad and the amusing in Africa, his refreshing candour and his sheer cheek, make Heart of Africa every bit as delightful as its forerunner.

From: North with Greyhound

On the day of my departure, Friday, 3 October 2008, I did not go to work since I had spent the previous weekend away from home in Namibia. So I decided to do some running around, accompanied by my wife and four-year-old daughter Nala. I still had to decide which route to take. As I would once again be travelling by public transport, I had, broadly speaking, two options: travel to Mwanza in Tanzania through Zimbabwe and Zambia, and from there go west to Rwanda by the main road that skirts Lake Victoria in the south before proceeding north to Uganda, and fly back to Johannesburg from Nairobi, Kenya. The second option was to go north from Mwanza to Kisumu in Kenya, proceed to Uganda by the main road that runs just north of Lake Victoria, finish the trip in Kigali and fly home with Rwandair Express, Rwanda's national carrier. I preferred option two, which meant travelling in an anticlockwise direction, starting on the eastern side of Lake Victoria and finishing off on its western side. There was, however, a tiny, little, last-minute stumbling block: Rwandair Express had not flown on its Kigali-Johannesburg route for a couple of months. According to their website the flight was going to be relaunched on 12 October - only nine days away. So I decided to give Rwandair Express a call. The lady on the other side of the line did not sound convinced that the airline would be flying from Kigali to Johannesburg in nine days' time. In fact, she told me straight that they had not even started taking bookings for that route. The news was definitely not comforting. One thing I did not want was to travel all the way to Kigali only to discover that I could not fly back to Johannesburg direct.

Why had the Kigali-Johannesburg flights been cancelled in the first place, and where were they going to source the new plane at this late stage? With these unanswered questions in mind I decided that, much as I preferred the second option, I had to go for the first: travel in a clockwise direction from Mwanza, through Kigali and Kampala, the capital cities of Rwanda and Uganda respectively, to the capital of Kenya - even though the prices of the direct Nairobi-Johannesburg flight were exorbitant. Kenya Airways charged more than r8 ooo and South African Airways asked about r6 ooo. According to Rwandair Express's website, a one-way flight from Kigali to Johannesburg would have cost less than R3 500. So the higher airfare from Nairobi was going to mess up my budget. Because airline tickets are usually more reasonable when you buy them well in advance, I decided - after endless phone calls and repeatedly checking the internet - to book the Nairobi-Johannesburg flight on s a a. It was a huge risk because it meant I had to get to Nairobi by 2 November, whatever happened on the way.

With my flight back to South Africa sorted, I could start worrying about other things. I still had to buy some toiletries. Just when I was about to do that, my wife suggested that we have "a proper lunch as a family on your last day". Without any argument I obliged. The meal took almost two hours. Once that was done, and after buying R15000 worth of us dollars at the then R8.70 exchange rate, my wife (again) made a suggestion - that I have a haircut. It had never entered my mind to have my hair cut as I still had not packed my bag. But the last thing I wanted was a fight with Lulu, considering that we were not going to see each other for about a month. It is worth mentioning that less than a month earlier she had had an ectopic pregnancy, which necessitated an operation during which her Fallopian tube and ovary had been removed and which halved our chances of having another baby. So for the past weeks she had not been her 100-per-cent self and now, barely four weeks later, I was going to be away from home for a month.

It being a Friday afternoon, people were getting ready to go out and the hair salon was packed. I suggested that we drop the haircut, but Lulu insisted. After an hour of waiting and twiddling our thumbs, she decided we'd better leave. We had to go home via the gym, I said. No, not to exercise - I wanted to weigh myself. I knew that, with the stress of travelling on my own and having irregular meals (less food), I was definitely going to shed some kilos, and in order to measure the exact weight loss during the trip it was necessary to know my current weight. I clocked a hefty but very healthy 94.3 kilograms, which meant that if I were a boxer, I would be in the heavyweight division (over ninety kilos). Weighing that much reminded me of a t-shirt I had seen a few days earlier: I am in great shape and that shape is round. Finally we rushed home. I packed my backpack and less than an hour later we were ready to make a beeline for Park Station, as Johannesburg's railway-and-bus station is often referred to. [...]

This is an excerpt from the book: Heart of Africa, by Sihle Khumalo.

Afrika – Dispatches from the Outside Edge

Afrika, Dispatches from the Outside Edge describes an epic 64327-kilometre journey around the circumference of the continent.

Home Away is an exhilarating mix of memoir, travelogue, thriller, humour and speculative fiction.