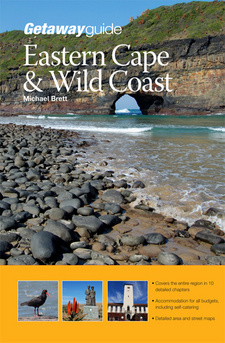 The Eastern Cape province has something to offer every visitor, whether you are looking for a relaxed beach holiday or a close encounter with wildlife, a cultural experience or a trip back into history. The Getaway Guide Eastern Cape and Wild Coast was written by Michael Brett.

The Eastern Cape's diversity of landforms, biomes and vegetation units is incredible. It is indeed possible for a traveller to struggle through a midwinter snowdrift in the Amatoles and later on the same day to be swimming in the warm waters of the Indian Ocean. The region's moderate coastal climate is ideal for beach holidays, and can be visited at any time of the year even though thoroughbred Eastern Capers tend to regard December and January as the peak holiday season. In fact, all that this means is that the other months of the year are perfect for relaxed holidays for people from other provinces when the area is not too crowded. In a province where there is so much to see and do, the main tourist attractions can be summarised as beach, landscapes, wildlife, culture and history. The Eastern Cape has South Africa's finest sandy beaches and has escaped the type of ribbon development that has destroyed so much of the natural beauty of other parts of the coastline. The exclusion of the Wild Coast region from the political economy of South Africa for more than a century has resulted in a unique region that has no equivalent anywhere in South Africa. The province's diverse and spectacular landscapes include the jagged Drakensberg, the wide open arid plains and rugged mountains of the Karoo, gently rolling grassy hills with forest patches tucked into their valleys, and deeply incised, hot river valleys clothed in thickets of Euphorbia and Acacia. National parks and provincial nature reserves protect representative examples of many of the province's splendid landscapes, and attempts should be made by national and provincial government to further expand the network of protected areas. The Eastern Cape is also the province where the segregationist policies that previously dominated South African politics were first developed. In the 19th century British administrators in Cape Town were fearful of Xhosa expansion into the colony (their experience with indigenous people at the time had been limited to the more easily subdued Khoikhoi) and the Great Fish, Keiskamma and Great Kei rivers became very visible physical boundaries between white- and black-occupied land. As the tribal reservations set aside for the Xhosa people were essentially outside of the formal economy, over time stark contrasts were deeply etched on the landscape: white farms became productive farmland with neat fields of cash crops, white fences, farm buildings and dairies; the black areas became overgrazed, eroded, over-populated and seriously under-resourced. The Xhosa reservations were given the status of self-governing territories and in 1976 and 1981 the Transkei and Ciskei respectively were declared as 'independent countries' with their own government, flag, airport and parliament. The exclusion of so many millions of people, without their consent, from participating in the governing and future direction of South Africa only served to make people more radical. (...)

This is an excerpt from the guide: Getaway Guide Eastern Cape and Wild Coast, by Michael Brett.

Authoritative and comprehensive, the Getaway Guide Eastern Cape and Wild Coast will help you to make the most of your visit to this region.

Touring South Africa's National Parks includes information that has never before appeared in print, along with 25 comprehensive maps that contain up-to-date data.