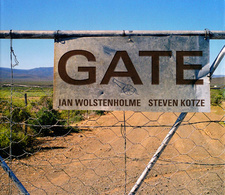 In their book Gate, Steven Kotze and Ian Wolstenholme look at the diversity of names that have been given to South African farms, and provides a photographic record of the distinctive styles landowners have chosen to celebrate the humble farm gate.

LAND IS AMONG THE MYRIAD OBJECTS TO WHICH HUMANS COMPULSIVELY ASSIGN NAMES. The tendency to name features of the physical environment is so widespread that it seems unimaginable that the practice did not evolve alongside spoken language. Continuous interactions between groups of humans throughout history, however, have given these names their significance or deeper meaning. In the context of the South African landscape, the nature of such associations is also a topic of considerable scholarly discussion. The photographs in this book show how some South African farmers have added an element of artistic expression to the names for their land. The images were collected over the course of three years during several trips spent driving along rural roads throughout the country. Locating these individual examples of idiosyncratic creativity was largely a matter of chance, but in the search for more gates to take pictures of, countless other farm names offered themselves along the roadside. This essay is an effort to place the names of farms, as they appear on gates, within the larger context of land and farming in our history. South Africa's past can be seen as an extended conflict over land and its resources, a struggle contested over centuries by many communities and individuals. Access to the land and its productive capacity was often the cause of hostile and bloody confrontation, as factions fought for exclusive rights of tenure to territory.

The need to sustain family life through the provision of food and water became entwined with memories of heroic victory and the anguish of loss and defeat. This process imparted competing descriptions of the natural terrain, and an emotional theme that has been widely expressed in art and poetry. Each community in South Africa thus retains a collective memory of names, which are inscribed on the landscape, and which carry different connotations of the past. It is, in fact, this lingering association with history that transforms the rugged valleys and open plains into instruments of symbolic value. According to one definition of this concept, it is not spaces which ground identification, but places. How then does space become place? By being named; as the flows of power and negotiation of social relations are rendered in the concrete form of architecture; and also, of course, by embodying the symbolic and imaginary investment of a population. Place is space to which meaning has been ascribed.

These incidental characteristics of places are clearly visible in significant landmarks such as towns and battlefields, or, to a lesser extent, in street names. In recent years, the bitter debates over the renaming of South African roads and municipalities provide evidence of how seriously contemporary society regards such subtexts. However, the unfolding memory of human endeavour on the landscape can be traced back for millennia. In a few places, distant memories of hunting and gathering still pay homage to a time before the introduction of farming to southern Africa. After two thousand years of agriculture, however, most of the names given to the land by the San (Bushmen) and their ancestors have vanished under waves of new arrivals. African names on the land are mostly derived from either languages that were spoken by Khoikhoi pastoralists in the south and west of the country, or dialects that were used by Sotho and Nguni farmers of the Highveld and eastern coastal regions, respectively. Until the industrial extraction of South Africa's mineral wealth began in the late 19th century, agriculture formed the basis of economic activity. Since the first introduction of cattle, sheep and goats to southern Africa, followed by indigenous African crops of millet and sorghum, the people of this region have depended on agriculture for survival.

Although great kingdoms and military traditions later eclipsed the fundamental importance of farming in popular imagination, the everyday existence of Iron Age civilisations was filled with the routine activities of cultivation. Proximity to the natural world also meant that names for animals and plants became enshrined within folk memories of farming livelihoods. Before the arrival of white settlers from Europe, the only lasting memorials for African kings and commoners were praise poems, known as izibongo in Zulu and iibongo in Xhosa. A vital element in this oral poetry was the countryside, which formed the backdrop to all social activity. On occasion, the land itself came to the fore, assuming critical positions in matters of state and stories of conquest. Valleys of prized pasturage, fought over for generations, jostled with the favourite haunts of mighty warriors in poems that became part of a national heritage. Inscribing shared memories on physical surroundings within the structure of praise poems was not only limited to the realm of politics and warfare, however. Families immortalised even the modest achievements of kinfolk and neighbours, while descriptions of landmarks in the physical world found their way into poems recording events within family homesteads. Vivid accounts of events or commonplace domestic arrangements familiarised listeners with the personal context of the lives described, and entrenched oral history in a recognisable landscape. [...]

This is an excerpt from the book: Gate, by Steven Kotze and Ian Wolstenholme.

Gate introduces names that have been given to South African farms, and the distinctive styles landowners have chosen to celebrate the humble farm gate.