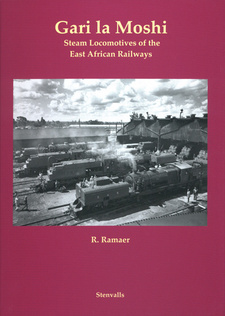 Gari la Moshi describes and wonderfully displays the history and operation of the steam locomotives of the East African Railways. In the following excerpt, Roel Ramaer writes about the The German period of East Africa, 1890-1918.

The German government, as a recent convert to the spirit of empire building, had great plans for its newly acquired colony of Deutsch-Ostafrika. The country largely consists of thinly populated savanna with mountain ranges in the north and south. These, as higher land, catch most of the rain and are thus agriculturally more attractive, which of course results in a higher population density. Besides these areas the southern coastlands of Lake Victoria, the present-day Mwanza district, showed a higher-than-average development potential. Agricultural development and settlement were exactly what Germany needed to provide a viable basis for its colony, and the preferred products were soon determined. The Usambara/ Pare mountain area in the northeast should supply sisal, coffee and rubber, the Tabora/ Mwanza region cotton and groundnuts. The southern highlands were reserved for a later phase. Economic development without transport facilities, and far more adequate ones than caravans of course, was rightly considered not feasible and planning a transport infrastructure started almost immediately after the formal establishment of the protectorate on 1 January 1891. During the same year the Eisenbahn-Gesellschaft für Deutsch-Ostafrika (Railway Company for German East Africa) was established, with the somewhat vague goal to build a railway from Tanga on the coast via the Usambara/Pare area westward to Lake Victoria. This line, later generally known as the Usambarabahn, was never to reach beyond Moshi in German days. Work on it was started in 1893, using metre gauge, also widely used for minor lines in Germany itself. The second line was initially planned as 750mm gauge, from Dar es Salaam, the capital of German East Africa, to Tabora. Planning was carried out by the Deutsch-Ostafrikanische Gesellschaft (DOAG) together with the Deutsche Bank, but this initiative came to nothing. One is tempted to say, fortunately, for the traffic capacity of a 750mm line would probably have been inadequate. The plans were revised a few years later, but only in 1904 did the Reichstag, the German parliament, vote the necessary credits for a metre-gauge line from Dar es Salaam to Morogoro. Work started on 1. February 1905. Besides these two metre-gauge lines, German East Africa boasted three public narrow-gauge lines: the 750mm Sigi line, a feeder of the Usambarabahn, and two 600mm lines, one operated by the DOAG and running from the station to the market at Tabora, and the Lindi tramway. Both will be discussed further on, whilst the Sigi railway was operated by the Usambarabahn and is best seen as a distant relative of the latter.

Work on the Usambarabahn started in June 1893 at Tanga with a company capital of only two million Marks. Rails of 15.5kg/ m (311bs/ yd) were used on wooden sleepers, allowing 7 tonnes axle load, the ruling gradient was 1 in 40 and minimum curve radius 150m. Not really the distinguishing points of a substantial railway, and the wooden sleepers started almost at once to give trouble. Leached by sun and rain, and savoured as delicacies by East African termites, they were shipped to Germany to be pressure-creosoted. The only result was that the termites now felt they got real sandwiches instead of dry bread and reacted accordingly. Only a change to steel sleepers solved the problem satisfactorily. The same problem bedevilled the early wooden sleepers on the Uganda Railway, incidentally. Lack of tropical experience did not only show up in the sleeper type. Narrow surveying repeatedly led to unsuitable alignments, no doubt as a result of difficult terrain conditions, combined with inexperienced field surveyors. An example was the double switchback at Ngomeni, which could have been easily avoided on a somewhat different alignment and which had to be painstakingly eliminated later on.

Pongwe was reached in October 1894 and Muheza (km 39) early in 1896, but shortly afterwards the company's slender capital reserves were exhausted, so that the government acquired the line and its assets in 1899 for 1.4 million Marks. It will be seen that the early railway experiences in British and German East Africa were largely comparable with the Government having to take over from a failing initial developer. Line building was now continued by the then well known contractors' firm Lenz & Co via their colonial subsidiary the Deutsche Kolonial Eisenbahn Bau- und Betriebs Gesellschaft, DKEBBG, or German Colonial Railway Building & Operating Company, which also built and operated German colonial lines elsewhere in Africa.

This DKEBBG made a far better job of its part of the line, which was vastly superior to the Tanga-Muheza section, and continued work via Korogwe to Mombo (km 129), reached early in 1905. The ruling gradient was now 1 in 60, minimum curve radius 200m and the 20kg/m (401b) rails (on steel sleepers!) allowed 8 tonnes axle load. Buiko (km 174) was reached in July 1909 and Moshi, in the foothills of Mt Kilimanjaro, early in 1912. The line was opened through to Moshi, 352km from Tanga, on 7 February 1912, and when the track on the eastern line section had been standardised with the DKEBBG-built section Muheza-Moshi, traffic increased rapidly. The financial position of the Usambarabahn became quite healthy, an operating ratio of 75.7 was attained in 1912 and one of 61.8 in 1913. From Moshi westward the Usambarabahn was never completed in German days. The next section, Moshi-Arusha, was surveyed shortly before 1914 and the German East Africa budget for 1914 covered 6.15 million Marks to build it, but the outbreak of war put an end to all these activities. From Arusha the line should have continued further west, south of Mt Oldeani to Lake Victoria, either Speke Gulf or, later, Mwanza.

From Mwanza a further line should head south to Tabora, there to connect with the Central Line, coming up from Dar es Salaam. A second connection between the two penetration lines should be Korogwe-Morogoro. The extensions Moshi-Arusha and Tabora-Mwanza were ultimately built during the 1920s, but much of the further rail network the Germans had planned never materialised. This included a branch to the north from the Usambarabahn near Sigi, returning south in a wide semi-circle, besides planned lines into the southern highlands, which were only partly realised decades later. Tanga-Moshi was covered in 14hr 40min, from 06.15 to 20.55 hours, which works out to an average speed of 15mph.

The Usambarabahn possessed in 1913 18 locomotives, 31 carriages, 91 covered and 18 open wagons. The first locomotives of the Usambarabahn were three 0-4-2Ts, supplied in 1893 by Vulcan of Stettin, and belonging to a fairly widely used type of 'Lokalbahn' loco. Vulcan had virtually standardised this sort of engine into a few well defined types for use on secondary and light railways in Germany itself, many of which were also operated by Lenz & Co. Somewhat unexpectly, the trailing carrying axle was rigidly mounted and only the driving wheels were hand-braked. These little locomotives were wood burners and were used for line-building and shunting duties, especially after 1900. Originally they were used on passenger trains as well. [...]

This is an excerpt from the book: Gari la Moshi. Steam Locomotives of the East African Railways, by Roel Ramaer.

Gari la Moshi describes and wonderfully displays the history and operation of the steam locomotives of the East African Railways.

Mikono ya damu: "Hands of Blood"

Mikono ya damu: Hands of Blood. African Mercenaries and the Politics of Conflict in German East Africa, 1888-1904.