Freshwater Life: A field guide to the plants and animals of southern Africa, by Charles Griffiths, Jenny Day and Mike Picker 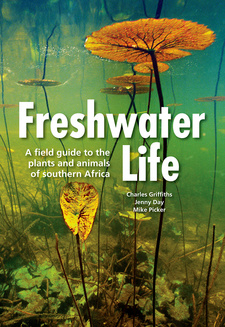 Using Charles Griffiths's, Jenny Day's and Mike Picker's book, Freshwater Life: A field guide to the plants and animals of southern Africa, should enable you to identify and learn about the ecology of common freshwater organisms across a range of animal, plant and unicellular groups.

We also include a brief overview of the ecology of freshwater ecosystems in the region and of the threats these face, as well as simple guidelines for collecting and studying freshwater organisms and undertaking freshwater-related projects, such as conserving water, building a wetland or pond and photographing freshwater organisms. The area of coverage is the wider southern African region, defined here as Africa south of approximately 17°S and thus including South Africa, Namibia, Botswana, Zimbabwe and southern Mozambique. Many of the taxa featured extend much further north, however, so this guide will be useful to readers throughout sub-Saharan Africa. Many more freshwater species occur in the region than can be accommodated in a book of this size. We have selected those that are featured on the basis of their size, importance, abundance and distributional range: essentially, by how likely they are to be encountered by readers. Thus, coverage of large conspicuous taxa, such as the vertebrates, is relatively comprehensive and usually pitched at species level, while that of highly diverse, small to microscopic taxa is more superficial and often pitched at family or group level. Each species or group description is illustrated with one or more colour photographs.

Group heading: Entries are arranged in chapters that cover major taxonomic groups at the phylum, class or order level (see p.39 for the taxonomy of the groups included in this book), depending on how well the group is known. The text below the heading describes features common to all members of the group and gives general information about their biology, as well as approximate numbers of species globally and/or in the region.

Family: Describes features common to all genera and species that fall within the family. This text should thus be read in combination with the genus or species entries below it. For some lesser-known groups only family-level entries are provided.

Genus or species: These entries give notes on the identification features, size and biology of the organism depicted. Both common and scientific (Latin) names of the organisms are given. Size is the average adult length, unless otherwise indicated. For some groups, such as insects, size is relatively constant within a species and is a good identification feature. In others groups, such as crustaceans and fish, animals are born small and grow to a much larger adult size, so individuals seen or collected may be immature and thus much smaller than the adult size indicated here.

Related and/or similar species: Where there are other easily confused or related species that could not be accommodated as separate entries we include a short section on how to distinguish these and where they occur. Maps - These depict the known distribution of the species or group featured. The distributions of many aquatic species are poorly documented, so it is quite possible that readers may find species outside of the depicted ranges (the authors would be keen to be informed of such records). For some groups, distributions are so poorly known that they cannot be plotted with any confidence, and here we have simply shaded the whole region with a light colour wash. [...]

This is an excerpt from Freshwater Life: A field guide to the plants and animals of southern Africa, by Charles Griffiths, Jenny Day and Mike Picker.