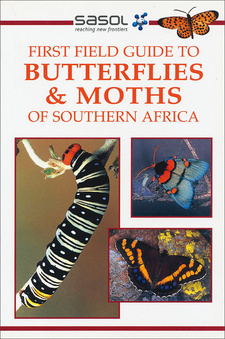 Butterflies and moths are among the best known and most visible insects. They are one of 32 different orders of insects and belong to a group known as Lepidoptera, which is the second largest insect order, after the beetles, with approximately 170 000 known species worldwide. Ninety per cent of this total are moths. The term Lepidoptera means scaly wings and refers to the thousands of tiny overlapping scales that cover the wings and bodies of these creatures. The scales provide the colour and patterns of the wings, and are easily rubbed off, leaving a transparent membrane with a network of veins. Butterflies and moths have a wide range of colours, forms and sizes. Size ranges from moths with a wingspan of a couple of millimetres to giants with a wingspan of 30 centimetres. Southern Africa is home to the Dwarf Blue, one of the smallest butterflies in the world, and the smallest in Africa. Our largest butterfly, the Emperor Swallowtail, has a wingspan of up to 12,5 cm; some of our Emperor Moths have wingspans as wide as 18 cm. Many adult butterflies and moths are important pollinators of a wide variety of plants. Butterflies visit flowers to feed on nectar, which they suck up with a modified mouthpart, their long hollow tongue (proboscis). When not feeding, this tongue is coiled up beneath the head. During feeding, pollen sticks to the butterfly’s body and is carried from one flower to another, resulting in cross-pollination of the flowers. Nectar is, however, needed by the adults to provide energy for flight (although a number of moths do not feed at all in the adult stage and as a result are shortlived). Caterpillars are 'eating machines' and consume vast quantities of plant material. They play an important part in food chains by converting leaves into protein (themselves). Caterpillars are then eaten by many other life forms, including insects, spiders, birds and lizards. All living things are grouped according to shared characteristics in a logical system of classification. Animals are grouped together in the Kingdom Animalia, which is divided into a number of smaller groups each called a Phylum. One such group is the phylum Arthropoda, which includes crabs, spiders, and insects. Each of these groups is, in turn, known as a Class. Butterflies and moths belong to the insect class Hexapoda. The class Hexapoda, in turn, contains a number of orders, one of which is the Lepidoptera (butterflies and moths). The order Lepidoptera includes 30 super-families. The Butterflies are grouped together in the super-families Papilionoidea and Hesperioidea. The remaining 28 superfamilies are all moths. Super-families are divided into families, which in turn are divided into subfamilies. Subfamilies contain genera (singular genus), which are made up of a number of related species.

This is an excerpt from First Field Guide to Butterflies and Moths of Southern Africa, by Simon van Noort.

First Field Guide to Butterflies and Moths of Southern Africa

First Field Guide to Butterflies and Moths of Southern Africa introduces to the more common moth and butterfly groups that occur in the southern African region.