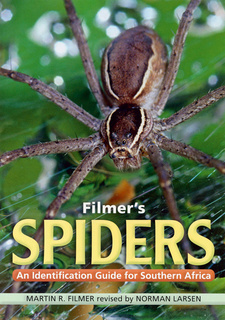 Filmer's spiders. An identification guide for southern Africa (A look inside)

Filmer's Spiders Identification Guide For Southern Africa features all 63 families of spider that occur in this region and has been written by late Martin Filmer and illustrated by Norman Larsen.

Spiders are, perhaps, among the most misunderstood creatures on earth, and this is due mainly to ignorance. There is no real basis for the fear and dislike many people have of spiders. From childhood, people are taught to kill or avoid spiders because they are 'poisonous'. When you consider that at some stage, most people come into contact with spiders - knowingly or unknowingly - without coming to any harm, it should be clear how erroneous it is to think that all spiders are venomous or dangerous. Many spiders are minute and, as such, are not easily seen. Some, on the other hand, are veritable giants, but their distribution and lifestyles make them difficult to find as well. By far the greatest majority of spiders encountered are the small- to medium-sized, dull-coloured creatures that wander freely around the home and garden. Filmer's Spiders: An Identification Guide for Southern Africa is a guided tour through the colourful spectrum of spiders that live all around us in a myriad habitats. Spiders belong to the phylum Arthropoda, and this phylum makes up about 80 per cent of all known animals. The word 'arthropod' means 'jointed leg'. Arthropods have an exoskeleton (a hard outer body covering), which includes three or four pairs of legs that are jointed so that they can bend. Arthropoda have been living on earth for literally millions of years. The major terrestrial arthropod groups consist of the classes Insecta and Arachnida. Insects have three body parts (head, thorax and abdomen) compared to the two in arachnids. Insects have two compound eyes and two or three simple eyes, antennae and six legs compared to arachnids' eight simple eyes, lack of antennae and eight legs. Insects usually have two or four wings, breathe through tracheae and usually develop through stages of metamorphosis, while arachnids lack wings, breathe using tracheae, book lungs, or both, and do not metamorphose (see p. 8 for typical spider anatomy). Arachnids usually take live prey that is pre-digested outside the body. […]

Migidae are arboreal mygalomorphs similar in appearance to Ctenizidae (see p. 113). They build their tunnels on trees or on rock faces. Since they do not dig tunnels, they do not have rastellums on the chelicerae. The eyes are arranged in two wide rows and are not situated on a tubercle. The spiders are quite squat with short, thick legs tapering towards the tarsi, and are mostly dark brown to black in colour. Poecilomigas has clearly banded legs, making it a most distinctive, easily recognized spider. A tough tunnel-web is made as a retreat on the bark of a tree or on a rock face, with a trapdoor at each end (in the case of Poecilomigas) or with only an upper trapdoor (in Moggridgea). If Poecilomigas uses a crevice in a tree or rock as its retreat, then only one trapdoor lid will be visible to the outside world. […]

This is an excerpt from the guide: Filmer's Spiders. An Identification Guide For Southern Africa, by Martin Filmer and Norman Larsen.

This well-known identification guide features the 63 families of spiders of Southern Africa.

Filmer's Spiders Identification Guide For Southern Africa features all 63 families of spider that occur in this region.

The guide Spiders of Southern Africa gives a sharp insight into a complex, often mysterious and always fascinating world of arachnids.

First Field Guide to Spiders and Scorpions of Southern Africa