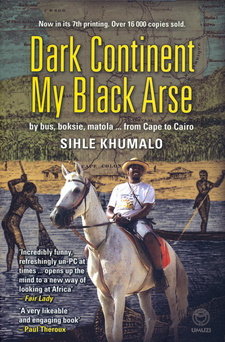 Dark Continent My Black Arse, by Sihle Khumalo, is a travel report by a young curious African who experiences flashes of absolute euphoria and moments of utter despair as he crosses his continent.

Windhoek, Namibia: I realised I was in another country when I registered that most of the notices hanging in the immigration offices were in German and Afrikaans, although English was made the official language of Namibia in 1990. The Namibian immigration official asked me, 'Why are you only visiting Namibia for the first time when we are neighbours?' I had no answer, really. Otherwise, getting into Namibia, which takes its name from the 1600-kilometre stretch of desert along the Atlantic coast known as the Namib, was no problem at all. My second consecutive night on a bus proved to be much more difficult than I had expected. You know what it's like when you're dog tired and yet keep waking up every half-hour. The fact that I had drunk all that milk and had to visit the toilet three times did not help either. While trying to sleep, I made the first of the many resolutions I was to make on the trip: I resolved that I would return one day to Namibia to do the five-day hike in the Fish River Canyon, the world's second largest canyon after Colorado's Grand Canyon.That was my Resolution No. 1. Zooming, exhausted, through the south of our northwestern neighbour in the middle of the night was not good enough.

The only thing that helped me to keep going was Laura's sugges-tion that we share my sleeping bag and her blanket. Otherwise, I am not sure how I would have survived that cold night. Laura seemed a genuinely nice person, but a Eugêne Terre'Blanche look-alike seated opposite us did not appear to approve of our getting so cosy. As the minutes passed, I could see from the way he was looking at us that he was turning greener and greener with envy. My first glimpse of Namibia, at dawn, was of a vast nothingness: few plants, huge open spaces - uninhabitable semi-desert under a big sky with no people anywhere to be seen, the towns very few and very far between. On the 786-kilometre stretch between the Orange River and Windhoek there were only two sizeable towns: Keetmanshoop and Mariental. There were no mines visible either along the route - as with many African countries, Namibia's main exports are minerals, mainly diamonds and uranium.

It was still early in the morning when we arrived in the spread-out, uncluttered city of Windhoek. The bus stop was right in front of the modern Supreme Court building. I was struck by the multi-storey modern buildings that could be anywhere in the world, the wide but, at this early hour, deserted streets. Except for a few stragglers. It was a cloudless day and I could literally smell clean, very cold, air. While we were waiting for our backpacks to emerge from the bus, Laura introduced me to a guy who had come to pick her up. 'Meet Robert, my boyfriend' she said with a straight face.

Hey Laura, what about the boyfriend you were visiting in Cape Town? I felt like asking, thinking to myself as I firmly shook Robert's hand, I hope you are using a condom, my brother. I had to wait for almost an hour for the bus to Swakopmund. We left Windhoek along one of the main streets - Sam Nujoma Drive - before heading through the northern industrial area, stopping at Okahanja only three-quarters of an hour later. It was strange that we should be stopping so soon after leaving Windhoek, but the hostess explained that this was our first and last opportunity to buy something to eat as we would stop only to pick up and drop passengers from now on. Although I was hungry, I could not buy anything because I had not yet had the opportunity to change currency. In no time we turned in a westerly direction, heading for the sea through a featureless landscape.

After 48 hours of non-stop bus travel since leaving Durban, I found myself in the very clean and compact town of Swakopmund with its bright old-world German architecture. The bus dropped us off in one of the small streets running parallel to Sam Nujoma Drive, by way of which we had entered town. As to be expected, Swakopmund's skyline is dominated by its light-house; despite the town's popularity, no skyscrapers have as yet been erected. Swakopmund was built at the end of the 19th century as Deutsch-Südwestafrika's main harbour, after the discovery of uranium 70 kilometres away made a harbour a necessity. Three-quarters of the town, with its grid-like layout, is surrounded by desert; the fourth quarter borders on the Atlantic. Most restaurants are on the beachfront, and most of the buildings that line the streets are painted unusual colours - bright yellow, orange, blue - the general impression a brilliant mix of colours. For me it was love at first sight. (...)

This is an extract from the book: Dark Continent My Black Arse, by Sihle Khumalo.