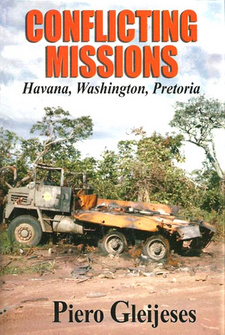 Conflicting Missions, Havana, Washington, Pretoria, is a report by Piero Gleijeses investigating Havana policy in Africa and of its escalating clash with US policy with the South African Defence Force in Angola.

When the South African column, Zulu, entered Angola on October 14, the MPLA controlled the few towns, the major villages, and the few roads in the south of the country. It also held the entire coast from Namibia to Quifangondo, north of Luanda. UNITAs territory had shrunk to parts of central Angola, threatened by the FAPLA. In the north, the FAPLAs elite force, the Ninth Brigade, held back Roberto and his Zairean allies. It was still, however, a poor man's war. South of Luanda there were only weak FAPLA units, badly armed and poorly trained. They were strong enough to defeat UNITA, but were no match for the South Africans. Zulu advanced at full speed, forty or forty-five miles a day, smashing through scant and ineffective resistance. For a few days the column moved west just north of the border, seizing Pereira de Eca on October 19 and Rocadas a day later.1 With the South African invasion, the second phase of the Angolan war began. Foreign troops would take center stage, as a bush war escalated into an East-West crisis. Scores of journalists descended on Angola, but covering the war proved extremely difficult. "A complete breakdown of internal communications, together with the withdrawal of all Portuguese forces from the interior of the country, makes it impossible to find out what the real military situation is," the London Times observed on November 6. "One of the more bizarre aspects of the war in Angola is that hardly anyone has seen it," the New York Times echoed two months later. "Journalists have been kept away from all fronts by the three warring factions."2 Press coverage was correspondingly shallow. The best was provided by the Rand Daily Mail and the Cape Times, which were kept relatively well informed by South African officials, who also set strict limits on what could be published. The two Luanda dailies, Didrio de Luanda and Jornal de Angola, are interesting only as mouthpieces of the MPLA. American newspapers are far more useful for their coverage of the debate in the United States about Ford's policy in Angola than for their coverage of the war. The books and essays that deal with this second phase of the war - from the entry of Zulu in October 1975 to the South African retreat in late March 1976 -  reflect the dearth of available primary sources.

The major exceptions are four accounts by South African authors: the two semiofficial histories of Operation Savannah by Spies and du Preez, and two books of memoirs by Commander Jan Breytenbach, who led one of Zulu's units. While these authors are frankly sympathetic to the South African viewpoint, their bias is tempered by their professionalism. Also useful are, with the same qualifications, the accounts of three well-connected South African journalists who specialized in military matters: Ian Uys, Helmoed-Römer Heitman, and Willem Steenkamp.3 It is these South African authors who make it possible to follow the advance of Zulu in the initial stages of the invasion. There were no journalists in southern Angola at the time - or, at least, none filed any report; the telephone system did not work, and press coverage was extremely hazy. The reports of the Cuban military mission are not informative (which is not surprising given that there were no Cubans in southern Angola), and declassified U.S. diplomatic reports are equally opaque.

Zulu was composed of more than 1,000 black Angolans and a smaller number of white South African soldiers. The Angolans, led by SADF officers and noncommissioned officers, were FNLA guerrillas who had been trained by Breytenbach during the previous weeks, and former Fléchas, a special military unit of black Angolans who had fought for the Portuguese during the war of independence, many of whom had fled after the fall of Caetano to Namibia, where the SADF had welcomed them and provided training.4 It is unclear how many SADF soldiers were initially in Zulu. Spies, the official historian of Operation Savannah, gives no figures. Du Preez mentions 150, but provides no details. What is known is that Pretoria immediately began sending reinforcements. Roçadas, for example, fell on October 20 to a battle group that had entered Angola soon after Zulu. This battle group, which included a squadron of armored cars, infantry, and a mortar unit, was, Breytenbach explains, "a purely South African force." After Roçadas, it became part of Zulu.5 Furthermore, in mid-October SADF planes transported about 100 South African soldiers, twenty-two Eland-90 armored cars, and other war matériel for a second task force, Foxbat, to Silva Porto, Savimbi's military headquarters in central Angola.

Foxbat absorbed the UNITA troops that the South Africans had been training at Silva Porto and began receiving SADF reinforcements within a few days. It is likely that by the end of October more than 1,000 SADF soldiers were in Angola (most with Zulu, the others with Foxbat) and their number was rapidly increasing.6 The size of the SADF presence was a function of Pretoria's evolving aims. The plan for Operation Savannah, which had been approved by Vorster in late September, included four phases, each more ambitious than the preceding one. The first three aimed to eliminate the FAPLA from, respectively, the border area, the southwestern region, and, finally, the central region. "Phase 4 provided for the capture of Luanda, the ultimate military objective," South African scholar Deon Geldenhuys writes. Vorster called the shots, deciding whether and when to move from one phase to the next.7 "The advance was far more rapid than expected," Breytenbach recalls. After the fall of Roçadas, on October 20, Zulu veered northwest deep into Angola. [...]

This is an excerpt from the book: Conflicting Missions: Havana, Washington, Pretoria, by Piero Gleijeses.

Conflicting Missions, Havana, Washington, Pretoria, is about Havana policy in Africa and of its escalating clash with US policy with the South African Defence Force in Angola.

From afkak to bosbefok - Voices of South African National Servicemen

Footprints: On the Trail of Those Who Made History in the Lowveld

Footprints: On the Trail of Those Who Made History in the Lowveld introduces to biographies and the regional history.