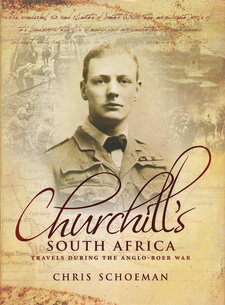 The fascinating story of Winston Churchill's time in South Africa during the Anglo-Boer War, with quotations from his own writings, and illustrated with historical and modern photographs.

Winston churchill was not only a famous British statesman, but also a prolific author and historian. During his early years, his position as a war correspondent enabled him to experience adventures in India, the Sudan and South Africa, which he vividly described in books such as The River War, London to Ladysmith via Pretoria, My African Journey and My Early Life. In addition, Churchill wrote monumental works of history, which included The World Crisis, 1916-1918 (on World War I), The Second World Wizrand: A History of the English-Speaking Peoples. In 1953 he received the Nobel Prize for Literature, as well as a knighthood. Churchill pursued a military career not as an end in itself but as a stepping stone to a political career, and he used a two-pronged approach to achieve this, namely by creating hero worship around himself and through his writing. He had a reputation as someone who sought war medals, and he maintained a strict regime of reading and writing, even in sweltering Indian or African conditions. Like another famous English writer, Rudyard Kipling, Churchill covered the Anglo-Boer War as a newspaper correspondent. They worked for the Friend of the Free State and the Morning Post, respectively. In later years, both looked back on the war in their autobiographies. As well as several short stories on the subject, Kipling devoted a chapter of his autobiography, Something of Myself to his war experience, while Churchill described his wartime adventures in London to Ladysmith via Pretoria, Ian Hamilton's March and My Early Life. But although both writers witnessed the war in fairly similar conditions, Churchill presented the Boers as loyal enemies, to be fought but respected, whereas Kipling viewed the Boers as treacherous guerrillas who deserved no mercy. Kipling took a violent dislike to individual politicians, and Churchill was one of them. But, ironically, Churchill was one of Kipling's great admirers. It has been said that much of what Churchill wrote probably did not happen quite the way he conveyed it, and that there were events that only happened in his mind. There is a fine line between truth and imagination, and those not thoroughly familiar with the circumstances in South Africa at that time would hardly have been able to distinguish between fact and fiction, especially if they lived several thousand miles away. But all the blame for misrepresenting certain situations cannot be laid solely at Churchill's door. Often newspaper editors, biographers and historians unquestioningly accepted his writings as fact, and interpretations of events may even have been manipulated for the sake of dramatisation and glorification, and to suit individuals' personal views on certain issues. Churchill himself has been accused of manipulation. In 1927, Major General Sir Frederick Maurice, in assessing Churchill's book The World Crisis, 1916-1918 in Foreign Affairs, wrote: Mr Churchill is a student of [historian/poet] Macaulay. Unfortunately he has confined his studies to the literary methods of the master... We experience all the charm of novelty, we are swept along by the exuberance and compelling force of our author, and are little disposed to pause and question his facts. [...]

This is an excerpt from the book: Churchill's South Africa, by Chris Schoeman.