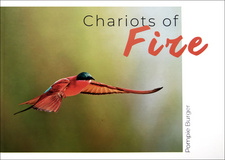 Chariots of Fire: Carmine Bee-Eater Breeding Colony at Zambezi Mubala Camp & Lodge, by Pompie Burger. The first known time the Carmine Bee-eaters arrived at this exact spot and started breeding was in the early eighties. The history of the lodge dates back to the eighties when it was initially built as an army camp.

The facilities were taken over by Gray Branfield, who developed it into a lodge used mainly as a fishing camp. At that stage it was called Kalizo Lodge. The lodge is located in the Sikunga Conservancy. Dusty Rogers bought it from him at the end of 1993 and made some improvements. The next owners were Val and Danny Sparg. They sold the lodge to Johan and Cherrie Griff ion in 2008, who initiated a project which is sustainable now and hopefully will be in the future. They got the community and conservancy involved, built a watchtower and employed guards to protect the colony. In the beginning of April 2017 Gondwana bought the lodge and rebuilt it to what it is today. All the above-mentioned private owners tried to protect the Carmine colony and all realise the importance, value and potential of the area, and obviously the Carmines. Hopefully, with the efforts of Gondwana and the community, this will be a sustainable project to keep and protect the Ben a di forever. It could even be developed as a World Heritage Site. One can debate the importance of tourists and their impact on any destination for days. Whatever one's perceptions, they are a reality that cannot be wished away In an ideal world there would be no tourists, no people who bother or damage the fauna and flora. The reality is that we must try to minimise the impact to such an extent that even the Carmines do not know about the intrusion of tourists/people. To start off, we should keep all visitors at a safe distance from the birds, to reduce the impact on this very sensitive period in the Carmine life cycle (breeding) to the minimum. The tourists are also the people that in the end will help us to keep this project alive and, even more importantly, provide funds for the conservation of and research on the Carmines. Bee-eater families seem to originate from the forests of Southeast Asia. Then, adapting to open countryside, they invaded Africa long ago and this gave rise to most of their contempered species. The southern African breeding population of bee-eaters is very recent, perhaps little more than 100 years (European Bee-eaters). There are over 130 Carmine breeding sites known in Africa (±10% of the total sites). The total population is +/- five million Carmines. Breeding takes place in southern Angola, extreme north-eastern Namibia, southern Zambia, eastern and southern Malawi and central Mozambique. The numbers at the Mubala colony vary around 3000 plus. It still amazes me how birders manage to count birds when there are more than two, let alone thousands. According to W. Nichol, who conducted a count in the early seventies in what was then Rhodesia, on the banks of the Umfuli River near Harare, the colony had over 7000 nests. Unfortunately, soon after his visit, the bank collapsed and the colony dispersed in smaller colonies. Other known colonies are in Namibia along the Zambezi River all the way from Katima up to the Chobe and near Shamvura Lodge at Katere on the Kavango River. New colonies are formed regularly. They are much smaller but can gradually get bigger with time. Unfortunately old ones also disappear, as was the case with a colony in Bwabwata National Park near its eastern border on the banks of the Kwando River. [...]

This is an excerpt from Chariots of Fire: Carmine Bee-Eater Breeding Colony at Zambezi Mubala Camp & Lodge, by Pompie Burger.

Chariots of Fire is a wonderful photo book on the Carmine Bee-Eater Breeding Colony at Zambezi Mubala Camp & Lodge in North East Namibia.

Birds of Namibia. A photographic journey

Birds of Namibia is written with the insight and knowledge of an accomplished Namibian observer and, as a photographic journey, highly entertaining as well.