Cellarmasters in the Kitchen, by Wendy Toerien 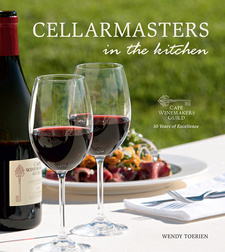 Beautifully written by Wendy Toerien, the text of Cellarmasters in the Kitchen is both light-hearted and entertaining as well as evocative and informative.

On the evening of 24 August 1982 a small group of Cape winemakers gathered at the home of Billy Hofmeyr, on his Klapmuts wine farm Welgemeend between Paarl and Stellenbosch, to officially found the 'Cape Independent Winemakers Guild'. The name reflected their raison d'etre, a 'guild' being the age-old and time-honoured concept of an association formed by merchants or craftsmen to maintain standards of quality in production and provide mutual support. It also illustrated their intent to represent the then few 'independent' winemakers in South Africa, as opposed to the many employed by grape grower-owned co-operatives and corporate producing wholesalers. It was a time when the latter, directly or indirectly invested with statutory regulatory powers, dominated the industry; when the Cape winelands was producing large volumes of predominantly white wine of a mediocre Quality; when economic sanctions against an undemocratic South Africa curtailed international (ravel, trade and competition, integral to growth and development. This 'independent' group was made up of individuals who (whether or not they owned their vineyard and cellar) had all-round, hands-on responsibility and control over their wine production: which varieties they grew; how their vineyards were managed; what wine they made; how they made it, marketed it and sold it. Operating in an environment that stifled progress, ambition, enthusiasm and creativity, they were keen to explore what could be achieved to improve the quality and develop a classicism and uniqueness in style of, not only their own wines, but Cape wine in general, through the introduction of new varieties and winemaking methods. 'It was Billy who first came up with the idea of the Guild,' remarks founding member Walter Finlayson. Born in Stellenbosch, a graduate of the University of Cape Town in 1949 and a land surveyor by profession, Hofmeyr lived out a life-long passion for wine on Welgemeend. He and wife Ursula bought the farm in 1974, replanted it to noble Bordeaux varieties cabernet sauvignon, cabernet franc, merlot and malbec, and introduced their first reds in 1979. Billy was a self-taught winemaker, but a classic traditionalist, vinifying his wines in a cellar equipped on a shoestring budget, but investing in expensive, small French oak barrels for maturation to enhance quality. He was also a member of the Wine Tasters Guild of South Africa from 1967; the winner of the inaugural Cape Argus newspaper SA Wine Taster of the Year competition in 1973; the founding chairman of the Stellenbosch Wine Circle in 1974; and a contributor to Die Wynboer (the specialist dual technical and consumer publication of its day) from 1974 to 1979. Once the Guild was formed, Professor Joel van Wyk was invited as a patron. Having studied at the University of California, Davis in 1965 and been appointed to head up the oenology department at Stellenbosch University in 1969, he brought a more serious educational aspect to the Guild's monthly tastings, held at Blaauwklippen wine estate in Stellenbosch. Founding member Etienne le Riche recalls: 'This was a good group of people who met for support and discussion; the tastings always had a technical angle and everything was centred on quality. It helped to get together to discuss issues, identify problems and try and bring them up in the industry to encourage change and development in areas we felt needed it, whether it was the finer aspects of the newly introduced Wine of Origin Superior rating system of quality and provenance; the importing of new varieties and vine stock; or the prevalence of young wine shows instead of bottled wine shows. [...]

This is an excerpt from the book: Cellarmasters in the Kitchen, by Wendy Toerien.