Cattle for beads: the archaeology of historical contact and trade on the Namib Coast, by Jill Kinahan 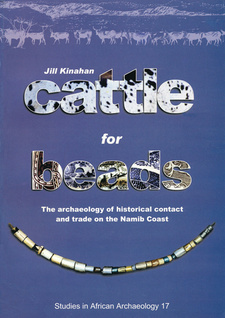 Published by the Namibia Archaeological Trust in Windhoek and the Department of Archaeology & Ancient History, Uppsala, Jill Kinahan's book, Cattle for beads: the archaeology of historical contact and trade on the Namib Coast, sheds new light on indigenous responses to early colonialism arising from the global spread of Western commerce.

Walvis Bay, the largest and safest harbour on the Namib coast, was known to maritime explorers as early as the fifteenth century European voyages of discovery. This study centres on 58 archaeological sites in the IKhuiscb Delta around Walvis Bay and Sandwich Harbour. The variety and distribution of trade goods among the sites reveal the indigenous response to the outside world, previously known only from written records documenting the attitudes and opinions of the foreigners. Walvis Bay was the port of access; the IKhuiseb River led to the interior. Because little modern development took place in the delta or the environs of the town before the late 1980s, the area provided an excellent opportunity for archaeological investigation of contact between indigenous society and the seafaring nations of western Europe. The voyages of discovery in the fifteenth century opened a maritime route which drew the people of the African coast directly into a network of trade with Europe (Wallerstein 1989) (Fig. 1.1). With new markets for cheap raw materials and their mass-produced goods, European mercantile interests expanded to dominate the world economy in succeeding centuries. During this process, some African societies diversified their economies and increased production as a result of the expanded external trade (Spear 1978; Kjekshus 1996) but ultimately, indigenous societies suffered major disruption and collapse (Wolf 1982). The growth of European hegemony is extensively documented, while the changes to indigenous society are not well understood. Charting the continents and oceans was part of documenting European exploration of the globe. Africa was represented as a large landmass punctuated by forests, mountains and rivers and divided into kingdoms of weird and primitive people (see, for example, the maps presented in Tooley 1969). Rumour and superstition were given as much validity as the discoveries of tentative journeys on the coast and into the interior. In tracing the beginnings of Western discourse on the primitivism of Africa. Rowlands (1989: 261-264) points out that the primary concern was with establishing the civilized identity of Europe, rather than accurately portraying the African continent. Africa, terra incognita, came to be associated with darkness, nullity and superstition; it was a remote void, to be filled from the outside by dynamic Europeans bearing the light of civilization. Eighteenth century Europeans considered the people they met on the southern African coast to be below them on the ''Great Chain of Being", their evolutionary inferiority explaining evident physical differences, and ultimately justifying colonial domination (Schrire 1984: 4-5). Until the mid twentieth century, Western intellectual tradition invoked the concept of social evolution to explain the differences between 'advanced' European societies and the 'backward' societies of the rest of the world (Champion 1989: 4). Common conventional notions about the collapse of Khoekhoe society (the indigenous pastoral people found on the southern and southwest African coasts during the days of European exploration) assume that the appeal of imported goods led the ignorant Khoekhoen to barter their cattle for immediate gratification of their needs with apparent disregard for the consequences of losing too many animals. The steady decrease in the size of their herds eventually impoverished them, destroying their social organisation and forcing them to enter the service of the colonists. In this process, the people are said to have degenerated to such an extent that they lost their own cultural knowledge and skills, even those of cattle-herding (Lau 1987; Berat 1990), and to have allowed imported goods to replace their indigenous products (Schultze 1907; Hodgson 1924; Walker 1928; Schapera 1930). This belief led several early twentieth century anthropologists to carry out fieldwork and interviews in the remotest places in order to capture information about the society before it was too late and all cultural knowledge had been lost. Khoekhoen living a pastoral way of life who could remember the old ceremonies and traditions were located in the Richtersveld in the northern Cape, and areas of the present day Namibia (e.g. Carstens et al. 1987: 174). [...]

This is an excerpt from the book: Cattle for beads: the archaeology of historical contact and trade on the Namib Coast, by Jill Kinahan.