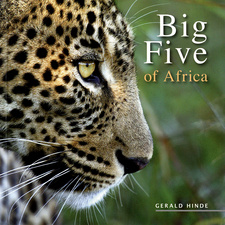 Big Five of Africa beautifully reproduces some of the more remarkable moments Gerald Hinde has captured on film during his visits to the wildlife sanctuaries of southern and East Africa.

The traditional Big Five of Africa, lion, leopard, elephant, rhino and buffalo, capture the spirit of the African bush and embody the legends of those early explorers and hunters who raised the status of these creatures above all others. The Big Five are the dominant animals of the grassland plains and deciduous woodlands that stretch across much of the subcontinent and, wherever they occur, they are the masters of their domain. The term 'Big Five' probably originated in the early 1800s as a result of the increasing popularity of sport hunting. These were considered to be the most dangerous animals to deal with when confronted on foot, and the ones most capable of killing a human, so it was natural that they would become highly sought-after trophies for sport hunters venturing into the largely unknown 'dark continent'. These pioneer hunters left a legacy of adventure stories that romanticised their endeavours, but they were also among the first Europeans to learn of the hunting practices and rituals of many African tribes. The most famous traditional hunt of all was conducted by the Maasai of Kenya, whose young warriors would go out to kill a lion armed only with a spear. This was a test of manhood and the warrior who killed the lion was entitled to wear its mane for the rest of his life. Ironically, the Maasai are the only African pastoral tribe still living with their cattle in the heart of lion country. Nowadays, the majority of 'hunters' are armed with cameras, and the photographic safari has become a significant revenue earner for many African nations. But one thing has not changed: the Big Five are still the target of the 'hunt' and tourists are often willing to pay large sums to ensure that they 'bag' them all. One thing the Big Five have in common is their affinity for the camera. Each, in its own way, offers the photographer the opportunity to document its unique characteristics and habits. Whether you are watching the seemingly studied indifference of a pride of resting lions or the edgy restlessness of buffalo heading for water, there is no end to the amount of time that can be spent observing Africa's giants and capturing their interactions with the other wildlife of the region, and even with one another.

LIONS HAVE AN EXTREMELY WIDE HABITAT TOLERANCE, being absent only from the interior of the Sahara Desert and the depths of Africa's tropical rainforests. Their optimum habitat is a combination of broken woodland and savanna, provided there is an adequate supply of suitable prey species, particularly wildebeest, buffalo, zebra and impala. For all the magnificence of the male, lion society is strongly centred on the females and their relationships with one another. Lion social life is complex and variable, but the basic social unit, the pride, consists of a group of two or more closely related females and their cubs. The size and composition of an individual pride changes frequently, as subgroups spend time away, often to mate or raise cubs, before joining up again. Hunting is a significant feature of pride life, and tends to be a collective effort aimed at maximising the chance of catching prey. Once a pride starts hunting in earnest, the lions maintain absolute silence and communicate via a series of subtle postures and movements. A practised pride operates as a single unit made up of individuals deeply in tune with one another's skills. [...]

This is an excerpt from Big Five Of Africa, by Gerald Hinde.

The authors of Africa's Big Five present experiences and insights they have gained through years of close observation.