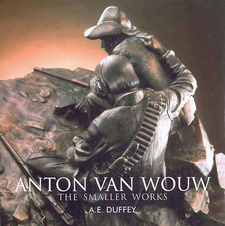 Anton van Wouw: The smaller works. Table of Content, by A. E. Duffey.

A. E. Duffey's book Anton van Wouw - The smaller works is not only aimed at the sculpture enthusiast in general, but also provides specialist knowledge to the expert and collector of the smaller works of Anton van Wouw. The following table of content shows the range of his art that is described in this book.

Many small sculptures that have never been included in Works on Van Wouw are described and discussed, including busts and maquettes. Attention is also drawn to his architectural sculpture. Apart from the quality photographs of the different sculptures, archival material provides the reader with insight to the circumstances under which Van Wouw created these pieces. The Dutch-born Anton van Wouw moved to South Africa at the age of 28. He soon developed a great appreciation of the people and country, which is reflected in the Europe/Africa duality of his art. Van Wouw, as a public figure, was newsworthy from his earliest days in South Africa and the information collected from newspapers and periodicals (which regularly featured news about him and his latest works of art) makes this an indispensable guide for everyone interested in South African art and history.

Table of contend of Anton van Wouw: The smaller works

This is the table of content of the book: Anton van Wouw - The smaller works, by Alexander E. Duffey.

Sculpting the Land is about the art of Strijdom van der Merwe and transient creations before they fade, are blown, or washed away.

The most important work on contemporary South African art yet

The Dictionary of South African Painters and Sculptors. Including Namibia

The Dictionary of South African Painters and Sculptors fills an enormous gap in the reference literature on African art, including Namibia.