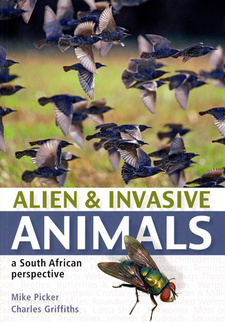 Alien & Invasive Animals is the first book to be published on alien animals from the South African perspective and was written by the professors Mike Picker and Charles Griffiths. Some 300 of the most important invasive animals in South Africa are described in terms of their history of invasion, identification and biology, distribution, known ecological and economic impacts, and control measures.

For the purposes of this book we have considered alien animal species in South Africa to be those that have been deliberately or accidentally introduced through human intervention and that have subsequently established self-sustaining wild populations. Where aliens have spread significantly beyond their point of introduction, they are considered to be invasive. Animal species that have established self-sustaining populations 'in the wild' fall into two distinct categories. These are (a) deliberately introduced species that have either been released directly into natural or disturbed habitats (e.g. Rainbow and Brown trout (pp. 61 and 62), Grey squirrel (p. 28) and Common starling (p. 41)), or that have escaped from culture and subsequently invaded natural habitats (e.g. Feral domestic cat, p. 23), and (b) accidentally imported species, such as rats, cockroaches and crop pests. Both groups may cause a variety of problems, out-competing, consuming, parasitising or otherwise altering native animal and plant communities in the invaded habitat. To make matters worse, introduced species have often escaped from their natural predators, competitors and pathogens (which would control their population numbers in their home environment), allowing them to reach unnaturally high densities in their invaded habitat.

The scope of alien and invasive species in this book necessarily excludes: (1) animals native to South Africa that have undergone a human-facilitated range expansion (apart from a few fish species included due to their important ecological impacts); (2) the very large number of species that are only found in captivity; (3) farmed or cultured animals; (4) those that occasionally escape from captivity, but have not established breeding populations in the wild, e.g. a number of alien snake species kept as pets escape continuously into the wild, but none appear to have established; and (5) cryptogenic species, which are those whose native range is unknown or debatable, but whose very wide global distribution patterns suggest that they have been dispersed widely by humans and are therefore likely aliens.

Typical invasive species tend to share characteristics that facilitate their establishment in new habitats - these include wide physiological tolerances, and life-history traits such as high levels of fecundity and fast growth rates, which make them both good competitors and tolerant of human-altered habitats. Many such species, including mice, rats, cockroaches, land snails and silverfish, have become virtually global in distribution, resulting in what is sometimes referred to as the 'MacDonaldisation' of the global biota. In general, one might expect that alien species introduced a long time ago would have the widest geographical ranges, and while this may often be true, there are certainly exceptions, such as the Giant garden slug (p. 198) and Common chaffinch (p. 38), which have persisted within very confined areas for a century or more since their original arrival.

Tens of thousands of deliberately or accidentally introduced plant and animal species have now established themselves in new habitats around the world, as the result of human activities. The impacts of these on the native biota is now recognised as the most serious global environmental problem after habitat destruction, and numerous academic and popular books have been written on this topic, some of which are listed in the section on 'Further reading' (p. 209). No previous attempt has been made to list the alien and invasive animals known from South Africa, and although the 601 alien species listed here (Appendix, p. 222) represent the most comprehensive current listing to date, this still certainly remains an underestimate of the true number of alien animals actually present. This is both because many animal groups and potential introduction sites have not been adequately sampled, and because we lack the taxonomic knowledge to identify species accurately for many invertebrate groups. In contrast, the given inventory of alien vertebrates in South Africa is probably complete. (…)

This is an extract from the book: Alien & Invasive Animals: A South African Perspective, by Mike Picker and Charles Griffiths.