Afrika – Dispatches from the Outside Edge, by Kingsley Holgate 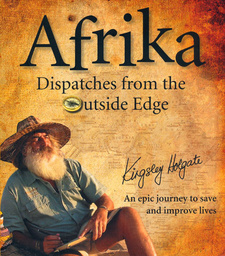 Afrika – Dispatches from the Outside Edge, by Kingsley Holgate.

In Afrika: Dispatches from the Outside Edge, Kingsley Holgate describes an epic 64327-kilometre journey around the circumference of the continent.

Dispatch #9 - Into the Sperrgebiet

Seven days after leaving the Cape of Good Hope and the volunteers having returned home, the four Land Rovers leave South Africa to cross the bridge over the Orange River into Namibia and the Sperrgebiet. Oryx graze on the banks of the river, the border post is easy and Chris Sivertsen, the friendly general manager of Namdeb diamond mines, is there to escort us into this restricted area. Weeks before, we'd sent in all our details for security clearance. Now we're X-rayed and through we go. It's a special privilege for the expedition; we're being allowed to follow a stretch of protected diamond coast normally closed to travellers. Chris, over a welcome dinner party, explains that it all began in 1908 when August Stauch, who was supervising the maintenance work on the railway line from Lüderitz to Aus, told his workers to keep an eye open for 'pretty stones'. One of the labourers, Zacharias Lewala, found a diamond and handed it over to Stauch, who staked a claim to the region on behalf of the German government. And so the diamond rush began. In 1911 a section of land demarcated by the Atlantic on the west and extending 137 kilometres inland, and reaching from the Orange River in the south to 26° north, was declared the Sperrgebiet, meaning 'restricted area', which has since become known as the 'Forbidden Coast'.

Chris and his wife Jenny put a team together. JJ and Iana are the geologists who will accompany us and with them is their little daughter Emilia. At six months old it's her first outing. Then there's Trygve Cooper, who still remembers the days when the Forbidden Coast was patrolled by men on camels from three police posts. Trygve is setting up the 26 000-square-kilometre Sperrgebiet National Park. He's a man of the wild who knows this area like the back of his hand. From the northern mouth of the Orange our Landies follow the Namdeb convoy along the outside edge to Chameisbucht, Baker's Bay and Bogenfels. The wind whistles through the old sun-bleached remains of the German diamond-mining settlements, with their old graves, tumbledown homesteads, schools, hospitals, mining equipment and railway lines through the desert. These were some of the richest diamond deposits in the world.

Men would lie on their stomachs on a moonlit night and pick up 'sparkles' in the gravel. 'Careful the ghosts, it's supposedly haunted,' says Chris, handing us over the keys to the old 'pink house' at Bogenfels. That night at the nearby mining camp, out comes the gorilla mask, and Sakkie Oberholzer sings Das Südwester Lied in a deep, booming voice. It's a song about Namibia being a land as hard as camel-thorn wood, the stones burnt by the sun. Babu Cossa from Mozambique sings in Shangaan and we add Zulu from KZN as well as English and Afrikaans. These diamond-mining lads have both a great thirst and insatiable appetite and more meat is thrown on the coals. Tonight their general manager is partying with them and they feel proud. Early next morning we're still singing around a hardwood fire outside the 'pink house'. The ghosts of the departed German miners have been quiet.

Interesting - they've caught them shooting diamonds over the security fence with crossbows. They try all sorts of things; 'stones' are cut into the heels of work boots and sewn into clothes, a Rasta man's hair lit up like a Christmas tree when they X-rayed him, and even carrier pigeons were used. Two little feathered friends were found with 144 rough diamonds attached to parcels on their legs. 'But don't get any ideas,' chuckles Chris. 'You'll be X-rayed before you leave for Lüderitz - we'll leave no stone unturned (no pun intended).' Don't forget to search the calabash. [...]

This is an excerpt from the book: Afrika – Dispatches from the Outside Edge, by Kingsley Holgate.

Afrika – Dispatches from the Outside Edge

Afrika, Dispatches from the Outside Edge describes an epic 64327-kilometre journey around the circumference of the continent.

Cape to Cairo – One Family's Adventures along the Waterways of Africa

Cape to Cairo introduces to Kingsley Holgate's adventures along the famous and tremendous waterways of Africa that he undertook with his familiy.

Africa – In the Footsteps of the Great Explorers

Adventurous Kingsley Holgate follows the footsteps of the great explorers through Africa and tackles journeys along the Nile, Congo, Rovuma and Rufiji and on the lakes Niassa, Victoria and Tanganyika.