A Piece of the Pie. The Battle over Nationalisation, by Tim Cohen 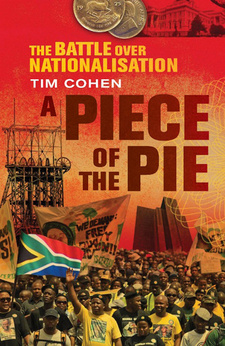 In his book 'A Piece of the Pie: The Battle over Nationalisation' Tim Cohen asks two seemingly simple but deceptively complex questions: first, why did the notion of nationalisation arise in South African politics in about the second decade of the 21st century; and, second, does the notion have any part to play in the future of South African politics?

For the proponents of the notion of nationalisation, the reason these questions arose is not complex at all. In fact, the reason, to their mind, is self-explanatory, because they would consider nationalisation efficacious and necessary in South Africa's particular economic circumstances. But for me the two questions are complex because nationalisation seems such an obviously bad idea. Nationalisation has a demonstrably poor record, and has very little, if any, support across the political spectrum, around the world, in our era. In fact, most countries in this period of history are much more concerned with denationalisation, or privatisation. Nationalisation does not have much support even among its traditional adherents, left-wing academics and left-wing political parties. Consequently, the questions are different for me: why do politicians choose bad ideas? How do they go about blocking their ears to reason? How do they distinguish their views from views that have widespread support elsewhere? How do they build support for these ideas? How and why do their ideas change? Consequently, this book is much less an argument against nationalisation, although the arguments for and against are obviously canvassed, as an examination of political dynamics. In many ways, South Africa is an ideal setting for these kinds of questions because its politics has been, in some ways unique and, in most ways, extremely turbulent. The notion of nationalisation might be a bad idea, but it pales into insignificance compared to the previous bad idea - apartheid. South Africa has a very rich history of bad political ideas, so much so that they seem to be mutually reinforcing, as we will see. I should also note, somewhat regretfully, that this book does not deal with the other politico-economic issue of current times in South Africa: land reform. In a way, the land question and nationalisation go hand in hand. Radical solutions to the land question are often proposed by the same people for the same basic reasons: grotesque racial inequality. Yet, in some important ways, the two issues are different. The notion of continuing state ownership is largely absent in the land reform debate and is crucial to the notion of nationalisation. The politics of land reform are also markedly different, and the international precedent different, too. It is also, frankly, an enormous topic on its own. For all these reasons and more, the land question does not feature here, and awaits its own detailed study. Behind the question of bad political ideas lies a much more ominous question: what are the limits or the dangers of democracy? Democracy is such an obvious 'good idea' for society that examining its weaknesses, or even considering that they exist, seems like heresy. [...]

This is an excerpt from the book: A Piece of the Pie. The Battle over Nationalisation, by Tim Cohen.

A Piece of the Pie. The Battle over Nationalisation

A Piece of the Pie: The Battle over Nationalisation offers a short, accessible overview of the political and economic debate surrounding nationalisation in South Africa.