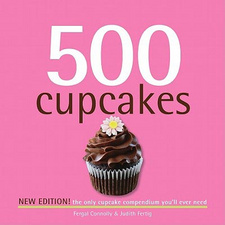 Fergal Connolly introduces to the science and art of cupcake baking and design alongside with 500 fantastic recipes.

Cupcakes come in many shapes and guises, but the one thing they all have in common is that they're small, individual-sized cakes baked in a muffin tin or cup-shaped moulds, which are often lined with pleated foil or paper baking cups. You can make cupcakes by baking almost any cake batter in a cup-shaped mould. Classic yellow cake or pound cake mixtures are particularly popular, but gingerbread, carrot cakes, fruit cakes, yeasted cakes and brownies can all be transformed into cupcakes. They can be iced, decorated, glazed, dusted or left unadorned - and whichever you choose, they're sure to be delicious. As well as making traditional baked cupcakes, you can steam some mixtures to make dense, moist desserts, like bread pudding. You can make other cupcakes using the no-bake method, in which you spoon a mixture of melted and dry ingredients into cupcake moulds and chill or leave them to set. These unbaked cupcakes are usually served uniced, or simply dusted with a little icing sugar or unsweetened cocoa powder. Types of cupcakes: Cupcakes go by many different names. Some describe specific types of cakes, while others are more generic, but whatever name they go by, cupcakes can be found worldwide. Even in Southeast Asia you'll find little cupcakes. In the Philippines, mooncakes - rice cakes steamed in banana leaf cups - are a delicious treat. Many great classic cupcakes can be served iced - chocolate buttercream cupcakes (page 32) are served with a generous smear of rich chocolate icing. Other ones, such as vanilla cupcakes (page 21) are delicious without icing. Madeleines are classic French cupcakes that are also served plain. Baked in a shell-shaped mould, they are traditionally made with a mixture of egg yolks beaten with sugar and lemon zest, then combined with flour, hazelnut butter and whisked egg whites. You will find a modern recipe for madeleines on page 39. Queen cakes are a traditional British cupcake made with a creamed butter mixture combination not unlike the vanilla cupcake mixture, with currants and lemon zest added. Traditionally, Queen cakes were baked in small, fluted moulds, but today they are usually baked in paper-lined or greased muffin tins. Icing cupcakes: Although some cupcakes are served plain, it is the icing that makes many cupcakes. Whether it's a thick smear of cream cheese icing or an intricately decorated cake topped with fondant decorations, it's the topping that often causes the greatest delight, not just for the sweet, luscious flavour it adds to a simple cake. Once iced, cupcakes are best eaten right away, and if you intend to store or freeze them, don't ice them first. Whether you are a child or adult, beginner or advanced baker, once you get started on the recipes in this book, you'll realise just how fun baking and decorating cupcakes can be!

This is an excerpt from the book: 500 Cupcakes, by Fergal Connolly.

Once you get started on the 500 Cupcakes recipes in this book, you'll realise just how fun baking and decorating can be!

This book is packed with ideas for every kind of snack, sweet treat, dessert or cake

Too Fresh to Flop