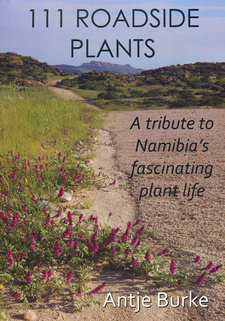 German Antje Burke came to Namibia in 1988 and has, as a researcher, lecturer and environmental consultant continued to feed her passion and knows the Namibian flora extremely well. 111 Roadside plants: A tribute to Namibia's fascinating plant life is an introduction to this flora and vegetation and a must-have for anyone interested in Namibia's nature.

What determines plant diversity in Namibia?

Namibia is the driest country in sub-Saharan Africa and not necessarily a place where we expect an abundance or diversity of plants. Indeed? The Namib proves us wrong. It is one of the most diverse arid places on Earth and, in terms of plant life, far surpasses many more-humid regions. This diversity in the Namib radiates out into the less arid parts of the country, which also receive an additional influx of humid-adapted, tropical species from centres of plant diversity and endemism in the north and north-east, and temperate regions in the south. In fact, the Cape Floristic Region to the south is the most diverse plant kingdom on the planet and influences Namibia's plant diversity. One of the enigmas of plants is that they indicate present as well as past environmental conditions. The current climatic conditions - largely rainfall, fog and temperature, as well as soil conditions and topography - determine which plant grows where. However, the potential species found in a particular area is determined by its vegetation history, stretching back several million years and covering a variety of different climatic conditions. Species evolve in response to changing environmental conditions. Over millennia, areas with fluctuating environmental conditions often also produce the largest pools of species. To complicate matters further, animals, other plants and disturbances, such as fire and bush-clearing, influence what grows where. Being nibbled or trampled on is not necessarily tolerated by every plant, and those that do not have sufficient armour to ward animals off, can be eliminated in areas where plant-eating wildlife or livestock is abundant. Other plants can be beneficial or detrimental to a plant; they can offer a safe shelter to vulnerable seedlings or add nutrients to the soil, such as those with nitrogen-fixing bacteria associated with their roots. On the negative side, plants can poison the soil or deplete soil moisture preventing other plants from growing. Chance plays a role as well. There is the chance of a seed being carried far out of the plant's normal range to a suitable free spot where soil moisture, temperature and other environmental conditions are exactly right for it to establish a new population. Or there is the chance of a devastating natural disaster wiping out an entire population. Keeping past conditions and processes in mind, the number of different niches ultimately determines how many different species can coexist at one particular place at the present time. Species-rich areas, such as south-western Namibia, offerthe most niches. Here a small patch of gypsum-rich soil supports a completely different mix of species than the sandy substrate nearby. Only a few hundred metres further, patches of quartz gravel, again, support different plants. These niches are not necessarily just spatially different, but also vary in terms of time. For example, the same place can support a field of lilies early in the season, which is then followed by grassland later in the year. Thus, getting a good approximation of plant diversity in a particular area requires surveys at different times during the vegetation season, and ideally over several seasons. New plant species are still being discovered in Namibia, despite its long history of plant collecting. Botanists have known about some new plants for many years, but never found them in flower, which is critical to describe new species. (...)

This is an excerpt from the plant guide: 111 Roadside plants. A tribute to Namibia's fascinating plant life, by Antje Burke.

Wild flowers of the Central Highlands

Wild flowers of the Northern Namib

This is the third volume in the Wild Flowers series about the northern Namib Flora.

Wild Flowers of the Central Namib

From the series of Antje Burke, this is a special guide to wild flowers of the Central Namib.

Wild Flowers of the Southern Namib

Wild flowers of the southern Namib includes plants which occur in the area of Lüderitz, Aus, Rosh Pinah, Oranjemund, Sperrgebiet and surroundings.

Let's look at Grasses. Guide to the common grasses of Namibia and their usage

How to identify common Namibian grasses, and their usage is part of Let's look at Grasses, an educational guide.