When the Russian Fleet visited Lüderitz and Dar-es-salam, Part 4, by Dr. Hans Schmiedel (1975) 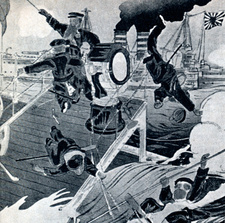 Japanese woodcut of the sinking of a Russian Flagship at the battle of Tsushima. With acknowledgments to No. 18 International History Magazine "Tsushima". When the Russian Fleet visited Lüderitz and Dar-es-salam, Part 4, by Dr. Hans Schmiedel (1975)

(continued ...) Von Trotha replied that he would most probably have been advised by the Governor in Windhoek had permission been granted for the Russians to coal in the harbour at Lüderitz and not on the open seas. However as he was not advised because no direct line existed between Windhoek and von Trotha. Both Governor von Lindequist and General von Trotha pretended ignorance. After its Russian ships were ultimately able to coal in calm water of the harbour, von Lindequist, by letter and not be telegraph, advised the German government that the Russians had in fact left. He also did not miss the opportunity to warn the Russians that suspicious ships had been sighted in the vicinity of Durban, probably Japanese, who might stage a nocturnal attack similar to that which rumour had it had been planned at Dogger Bank. These events pleased the Russians immensely. Thiess relates further: "Major Lequis was invited on board the flagship of the Russian fleet. The sailors cheered him and presented arms as if he were the Russian Tsar. They laughingly told him they could have kissed and blessed him. He laughed, shook hands with Rozhdestvensky, although just a short while before Rozhdestvesnky had grabbed a vegetable and fruit transport, which in fact was intended for the Germans. For Lequis the Russians were no "barbarians". He invited the Chief of Staff and all the officers to his house and this invitation was reciprocated by the officers to the ship "Ssuworoff". The officers were impressed with the clean town of Lüderitz and enjoyed their stay very much. On the "Ssuworoff", between hearty drinking, both the German Kaiser and the Russian Tsar were toasted. There were also toasts to early victories over the Japanese and the Hottentots. Lequis later became famous as general during the important German battle of World War I at Karfreit, where during October 1917 German and Austrian troops annihilated the Italian forces. During the night of the 16th to 17th December a deathly silence reigned at Lüderitz. The storm had abated and thick fog appeared. A steamer from Cape Town brought the latest newspapers. According to these on December 6th the Japanese were able to take a fiercely defended mountain in the Russian line of defence of Port Arthur. Thereafter they destroyed the entire Russian fleet in the harbour. Was there any point for the Russian fleet continueing over the endless Indian Ocean and the Chinese Sea, to Port Arthur in the hands of the Japanese and would therefore be useless as a base for Rozhdestvensky's fleet against the victorius fleet of Admiral Togo? On this discordant note the "Russian Idyll" ended at Lüderitz and Rozhdestvensky sailed around the Cape of Good Hope to the French island of Madagascar to wait there for the second part of the 2nd Pacific Squadron, which was supposed to travel through the Mediterranean and the Suez Canal. On board the "Ssuworoff" the sailors raved for weeks about that magnificent German officer at Lüderitz, who had, as a genuine comrade and soldier, given them hope through their gloomy voyage into a dark future! Admiral Völkersam was the Commander of the Russian fleet which undertook the voyage along the east coast of Africa. He also hailed from the Baltic countries, but because of an ailment was indecisive. He died on board his flagship the "OSSLJABJA" two days before the battle of Tshushima.