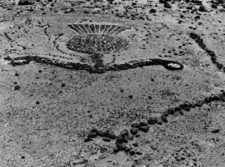 Photo No 7 - Insignia in the Desert of South West Africa SWA, by Bryan V. Cooke. 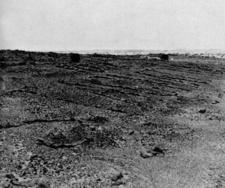 Photo No 8 - Insignia in the Desert of South West Africa SWA, by Bryan V. Cooke. 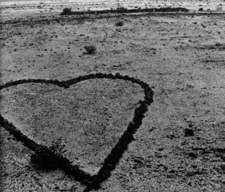 Photo No 9 - Insignia in the Desert of South West Africa SWA, by Bryan V. Cooke.

Photo No 10 - Insignia in the Desert of South West Africa SWA, by Bryan V. Cooke.

Photo No 11 - Insignia in the Desert of South West Africa SWA, by Bryan V. Cooke. 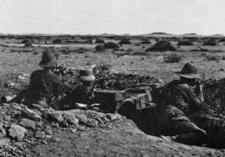 Photo No 12 - Insignia in the Desert of South West Africa SWA, by Bryan V. Cooke.

In this contribution of 1975 Bryan V. Cooke tells about relics and insignia of the 1914-15 Military Campaign the Desert of South West Africa SWA.

A few kilometres further eastwards, just below a sangar crowning a small kopje overlooking a bridge, one finds a name, "G. C. JACOBS", topped by the figure 2, alongside a metre-wide pathway, (photograph 2). On the other side of the path lie the letters "2 nd K.R." This sangar is within a mile of the imposing Rossing Mountain and one must scale its topmost peak to admire the spectacular views as well as to explore the heliograph platform built by the Germans and used by South African signallers throughout the campaign. The signal company camped on a saddle just below the heliograph station. The campsite, as in all cases, is clearly recognisable by the numerous rusty corned-beef cans and the outlines of the tents in stones used to weigh the edges down. On a slight rise above the campsite lies a unique badge of the "SIGNALLERS, 4th COY., SOUTH AFRICAN MOUNTED RIFLES", (photograph 3). The badge is unique because it is the only one where only white quartz was used but unfortunately, due to the size of the pebbles and the exposed position, it has become somewhat blurred. A party of well-meaning campers recently tidied it up a little but mistakenly made the "S" into an "R". Back next to the railway line at kilometre 40, an arrow-straight pathway points up a hillside (photograph 4) towards a small circular fort built by the 2nd Transvaal Scottish. The fort is still surrounded by barbed wire supported by steel posts. A few yards below it lies the most exquisite of all the badges, a thistle "button" eight feet in diameter incredibly well-detailed in brown and white stone and gravel, (photograph 5). Then on to Kilometre 46 where one finds the best-known of the desert relics, the ninety feet by forty feet badge of the 2nd Durban Light Infantry, (photograph 6). This huge masterpiece is so expertly laid out in brown boulders and quartz chunks that the details are clearly discernible from the road half-a-mile away. A few yards from the DLI badge lies one of the Transvaal Scottish, a delicate thistle complete with scroll bearing the famous regiments' Gaelic motto "ALBA NAM BUADH" but with only partially completed encircling wreaths and shield, (photograph 7.) At Kilometre 56 lies an interesting collection of relics on both sides of the line. Two high-points are crowned by stone fortifications, the Northernmost one further strengthened by three curved stone walls with trenches. Below the Southernmost fort, in neat letters up to five feet high and expertly framed, lies the name "FORT STAGNATION"! (photograph 8.) How succinctly this name puts into a nutshell the frustrated feelings of those unfortunate souls marooned "in the back of beyond"! Near the familiar pathway leading up to the other fort is another unusual and curious design, a ten-feet high heart laid out in brown stone, (photograph 9.) What thoughts were passing through the mind of its' builder as he sweated in the sun? Hopefully, soft thoughts of a sweetheart waiting back home! Next one reaches Arandisberg, that chocolate-brown rocky ridge so familiar to motorists on the highway. On a lower ridge is a clearly discernible stone fort whilst on the highest point is a heliograph platform. This vantage point was visited by General Botha himself on April 13th 1915. Numerous fortifications mark the guard-posts along the line between Arandis and Trekkopjes. At Trekkopjes station lies a neat cemetary with the carefully tended graves of eight South African and nine Germans who fell at the famous battle there on the 26th April 1915 (photographs 10 and 1I.) This sharp engagement is famous in that it was the first time that armoured vehicles were used by South African forces in battle. The presence of a unit of Rolls-Royce-engined armoured cars with revolving machine-gun turrets turned the tide in favour of the outnumbered South African force. On the battlefield, within walking distance of the graves, one can still clearly see the shallow trenches dug by the troops as they hastily dug into the rocky soil to meet the German attack. Between Trekkopjes and Usakos the countryside becomes bush- and grass-covered and the many fortifications on the hill-tops overlooking the line cannot strictly be labelled desert relics but they are nevertheless worth visits and investigation. The South West campaign of 1914-15 is such an important part of South African and South West African history and these relics in the desert are well worth protecting for all time. One trusts that the National Monuments Council will keep to their promise to choose some of the outstanding insignia to get the official protection they deserve.

Back to first part:

The Merit Medal for Combatants in German South West Africa 1892-1918 was awarded to members of the native population.