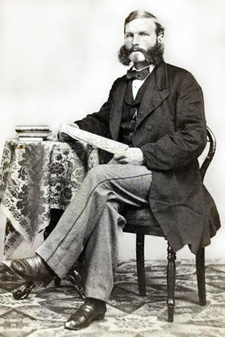 In the second chapter of his well written and highly entertaining Memories of several years in south-western Africa 1866-1871, the swedish mariner and trader Thure Johan Gustaf Een describes the voyage from Cape Town to Walvis Bay by ship.

[...] On 1 May 1866 we sailed from Cape Town in the schooner Telegraph which had been hired by Andersson for the passage to Walwich [Walvis] Bay, the expedition's point of departure into the country. Aided by a southerly wind, we sailed out of Table Bay and almost immediately entered the south-east trade wind which soon, after 7 days sailing, brought us to the Bay, a voyage of about 900 miles. According to information given me by a very prominent doctor and scientist in the Cape, Med. and Ph. Dr Becker, Walwich Bay, which was called Walfish Bay by Andersson in his travel book 'Lake Ngami', was named after the English naturalist Walwich, a name that is also generally used in the Cape by all Englishmen. A spit of land running almost parallel with the coast forms the Bay, which provides a safe and spacious harbour for the most deep-drawn vessels. It would certainly long ago have been annexed by the English were it not that a supply of sweet water cannot be obtained closer than 2 miles away, which diminishes the value of the harbour. A rather remarkable natural condition, that should be mentioned here, is that 30 miles south of Walwich [Walvis] Bay, at a bay called Sandwich Harbour, sweet and tasty water can be obtained by digging just a couple of feet on the actual very low-lying beach consisting of hard sand. This water probably contains much sulphur because, if it is kept on board for a long time, it becomes very ill-tasting and acquires a rather unpleasant smell reminiscent of sulphur. Walvis Bay cuts into the land with a large lagoon, around the shores of which there are flocks of innumerable sea-birds, among which the most common are dykers [duikers] or diving birds the size of an ordinary duck, with a long neck and quite black in colour. In the morning these birds leave in flocks of several millions, so that they darken the surface of the sea, and go out to sea to catch fish by diving under the water. They return towards evening. There are also pelicans and flamingos, although in lesser numbers. The pelican catches its prey just below the surface, diving down upon it like a vertically falling arrow. The flamingo, the most beautiful of all sea-birds that I have seen, is the size and shape of a heron, all white with some red feathers in the wings that are very appreciated by the ladies in Cape Town for their hats. This bird lives mainly on insects and molluscs, which at low water remain on the beach that had previously been flooded by the sea, not an inconsiderable stretch, as at high tide the water covers up to half a mile of beach. Because this way of life makes the flamingo less oily than other sea-birds, it can be prepared for a dish that is not unappetizing. Wild ducks and sand-snipes also occur, as well as other birds, but hunting in this area is made difficult because the open plain does not provide any cover for the hunter.' Walvis Bay with its lagoon also has an abundant supply of many kinds offish, and with the outgoing tide it often happens that the fast-flowing receding water leaves many fish stranded so that they become easy takings for the natives. Sometimes jackals and hyenas also arrive for their share of the booty. The natives also fish by walking out in the lagoon which is very shallow and full of sandbanks, and spear the fish by means of a horn of a gemsbok stuck on to the end of a thin stick. I shall try to describe a selection of the many species offish although, lacking scientific training, I cannot give the scientific names and shall try to give a description using the local names. Barracuda, called snoek in Cape Town [Thyrsites atun] is a skin-fish similar to the pike and varies in size between 2 and 3 feet. This fish is extremely voracious and is caught in the same way as is a pike, by means of a spinner. Stimbras [white steenbras, Lithognathus lithognathus], a scaly fish, looks like a bream and is white in colour; it varies in size, sometimes reaching a weight of 2 to 3 pounds. This fish is used as bait in shark fishing. Less common is the kabeljou [cob, Argyrosomus hololepidotus}, a large rather well-tasting scaly fish 6 to 8 feet long, weighing up to 10 to 12 pounds. During our stay at Walvis Bay, I and other Europeans often shot this fish with a bullet when it approached the surface. Sole [Austroglossus sp.], the most appetizing of all the Bay's fishes and in size and shape resembling the sole of a shoe from which it has received its name, is caught in nets, but is rare. Harders [Mugil capita], that look like mackerel, are abundant. Barracuda and harders that come from the above-mentioned Sandwich Harbour are salted and dried at Port Ilhao [Ilhea Point] where large fisheries have been established, and are exported in immense quantities via Cape Town to Mauritius or He de France. Andersson's information that a kind of whale that he calls humpback and from which oil or train is prepared for export, is found in Walvis Bay, is probably based on a mistake and this may be connected with the name Walfish Bay that he adopted. Despite my having stayed at Walvis Bay at all the different times of the year, I have not seen more than one very small whale which accidentally stranded there, and I know with certainty that whale catchers never visit the Bay.  [...]

This is an excerpt from the book Memories of several years in south-western Africa 1866-1871, by Thure Johan Gustaf Een.

Memories of several years in south-western Africa 1866-1871 has been translated and edited from the original Swedish edition of 1872.