Zulu Zulu Foxtrot: To Hell and back with Koevoet, by Arn Durand 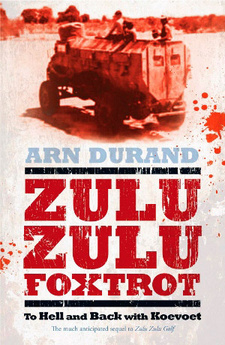 Arn Durand, who was a Koevoet member in Angola and North Namibia, introduces the second volume of his war memoires, Zulu Zulu Foxtrot: To Hell and back with Koevoet.

[...] The demons start to creep through my soul and into my head, carrying me to the nightmares. They're all dead. My team members are all dead. Some lie in our Casspir, which is slumped to one side behind me. I'm lying on the hard, gritty ground with my back against the left-rear wheel. Others lie dead around me. Mandume's dead behind the wheel. Bennies dead, Joe Talipi's dead, Kanjambanga's dead. Elias is dead, Haifenie's dead, Bokoma's dead. They're all dead. Their bodies are scattered around me. We've been ambushed; countless RPG-7s have taken us out. I'm half deaf from the explosions, but I can hear them coming from the other side of the Casspir. Soon they'll come around the back or the front of the vehicle or from both sides at once, creeping up on me. Between the rear of my Casspir and me there's a log, which provides some shelter. I'm ready, as ready as I'll ever be. I'll make my last stand, fighting to the end. Slipping the safety of my R5 to fully automatic, I see the first one appear from around the back of my Casspir. He is dressed in a Chinese rice-pattern uniform, black Soviet combat boots, Russian webbing. Half crouched, he's leaning forward with an AK-47 at the ready, held at his waist. He's close, so I aim from across my hip and pull the trigger. Fuck, it won't fire! The trigger won't move. I pull and pull, but my R5 won't fire. It's cocked. The safety is off, and as hard as I pull the trigger, it just won't fire. Over and over I pull, helpless in my nightmare. My opponent is joined by a second terr and still nothing fires from my R5. I'm desperate, alone, pinned against the wheel of my Casspir and totally at their mercy. I try to look into their eyes as they approach. 'They don't have eyes!' I cry to myself. No eyes, just black, blank, featureless faces. Suddenly, their AK-47s erupt in unison. Shock waves tear through my body as it jolts upwards and spasms uncontrollably. Then I feel my soul leaving my body. I drift up and away and hang about 10 metres in the air, looking down at the scene below. Everyone's dead. Five terrs are crouched over my corpse. One of them is holding my head as if he's trying to pull it off my body, while another has taken his AK-47 bayonet out and is hacking away at my neck. My God, they're trying to cut my head off. As I gaze down on this gruesome, grisly scene in horrified anguish, a sudden sense of great calm and contentment overwhelms me. It's a feeling of complete peace, harmony and happiness, and I realise that I'm being carried away. I'm riding on the wings of a white angel. And now there's darkness. I'm swallowed by blackness. [...]

This is an excerpt from the book: Zulu Zulu Foxtrot: To Hell and back with Koevoet, by Arn Durand.