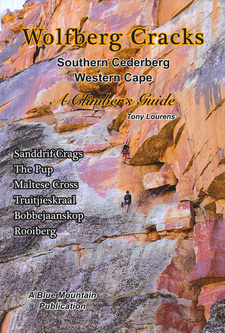 It's difficult to climb anywhere in the Cederberg and come away disappointed. The areas described in Wolfberg Cracks: Southern Cederberg, Western Cape by Tony Lourens all give fantastic climbing, in very different and awe-inspiring situations.

Wolfberg is without a doubt the main event among these areas and is also the most convenient of the Cederberg's three main trad venues (the other twc being Tafelberg and Krakadouw), as it is the only one at which car camping is, feasible due to the relatively short approach walk, of about an hour, to get tc the foot of the crags. The fact that the camping is comfortable, and there is alsc the option of hiring bungalows, makes it even more convenient. Of course, the down side of this is that you don't get that wild, remote feeling as you do a Tafelberg or Krakadouw. The main walls of Wolfberg, which stare down at you from their lofty hill-top position, offer some of the most immaculate climbing to be found anywhere in the Cederberg. Classics like Omega, Celestial Journey, Alone in Space anc Energy Crisis, to name but a few, are routes that should be on any climber'; shopping list. Gaper Crack also has some good, but shorter, routes with Knobless Robot and Le Grand Gul, among others, recognised as instan classics. In the southern Cederberg one is really spoilt for choice, as you can be doing five pitch trad routes the one day and the next you can be clipping bolts on a variety of crags at three different venues. And on your rest days you car choose between exploring the many hiking trails, swimming in fantastic rock pools, hunting for rock art, relaxing with a good book, or sampling some of the superb wines at Dwarshvier Farm and also at Nuwerus. Like the other major trad venues in the Cederberg it is not ideal to be climbing up at Wolfberg during the chilly winter months, as the shadowed rock is icy on your fingers and the short days leave you little time to find a sunny patch to climb in. Wolfberg is best from about October through to about April and it would be better to spend the winter months climbing up at the Pup where you will find spectacular camping on the vlakte below the wall, or ai Truitjieskraal. Rooiberg at Nuwerus is also not ideal during winter, but makes a spectacular summer crag, as the sun only reaches the crags at about 3 pm. Whatever your choice, a trip to the southern Cederberg will always leave: you hankering for more, as the variety of climbing is unsurpassed and the; quality is as good as it gets with the hospitality at the various establishments always warm and friendly. Every effort has been made to make this guidebook as comprehensive as possible and every endeavour has been made to include all the routes on the various crags, but of course there will always be those elusive few that escape the net. Although there is photographic representation of the majority of the walls and crags with most of the routes marked, some of the areas are exceedingly difficult to photograph or just not worth it to show one or two arbitrary climbs. If a route described in the text is not marked on a photograph, then there will be mention of the closest marked route as a starting reference point. [...]

This is an excerpt from the climbing guide: Wolfberg Cracks: Southern Cederberg, Western Cape, by Tony Lourens.