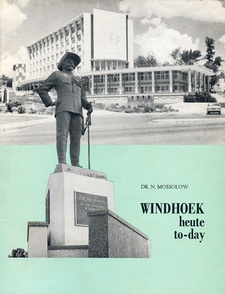 In Windhoek to-day, today's reader will find information on local history that will not be available in the internet. Nikolai Mossolow here describe many institutions and clubs in Windhoek of the sixtees one has hardly heared of.

Windhoek's outward appearance was formed by two architects: the government architect Gottlieb Redecker, who was responsible f or all government buildings (including the Lutheran Church) between 1899 and 1915, and the architect Wilhelm Sander, who designed most of the private buildings between 1904 and 1924. Buildings for the Schutztruppe were erected by the "Military Board of Works". World War I stopped the structural develop-ment of Windhoek and its outward appearance was badly neglected. The Military Magistrate, Town Clerk Kerby and the new Town Council made a dubious "inheritance", but they did their best to improve matters. Building activities only revived in 1920. In that year Windhoek had altogether 409 buildings; 99 construction plans were submitted, 22 of them for new residences and houses of business. The sale of town sites was encouraged unsuccessfully because of the lack of credit. During the period following the depression the building activity practically came to a standstill until 1924 when a slight revival was noticeable. In April of that year the erection of several business buildings and renovations of houses were begun as well as the construction of buildings f or public bodies such as the Catholic Hospital. Private building activity stagnated and only the government departments such as PWD (Public Works Department) and the SAR (South African Railways) were erecting buildings for the accommodation of their offices and staff. In 1926 the firm of S. Cohen moved into the new garage in Kaiser Street and the construction of the "Acme Cinema" and the two-storey building of what is to-day the Shell Co. were begun. A year later housing sites on Bismarck Street (in vernacular Racketeer's Avenue) were surveyed and offered for saie. The new "Aula" (great hall) of the Convent School was completed. At the beginning of January 1928 the four-storey building of the S.W.A. Breweries and the girls' hostel for the Hohere Privatschule (German Private School) were completed.

At the start of 1929 the new building of the Hotel Grossherzog was inaugurated: the new block consisted of bedrooms, a new hall seating 650 people and a new stage. In that same year the building of the Höhere Privatschule which was torn down recently and the Zoo Café were completed. In 1931 the two-storey "Liwinowski-Corner" and the building now occupied by the "Volkskas" as well as the "Railway Institute" were finished. In 1934 the Show Grounds with the large and spacious building for exhibition purposes were laid out according to the plans of Mr. George Kerby. In 1936 the Public Swimming Bath which has now been closed, was opened. In 1937/38 the building activity of both private houses and public buildings increased and this development continued until the middle of 1939.

The completion of the Windhoek High School and its inauguration by the Administrator, Dr. D. G. Conradie, the construction of several blocks of buildings for the railways and the completion of the extensions of several public buildings occurred during this period. The above enumeration describes most of the achievements in the building department during the period between the two world wars. These new structures did not change Windhoek's outward appearance but rather gave it a more solid aspect, especially the two-storey buildings on Kaiser Street. There was no extension of residential areas or opening up of new ones. The gaps between the widely separated houses on Kaiser Street and Bismarck Street (Racketeer's Avenue) and in the region around the Höhere Privatschule were closed. [...]

This is an excerpt from the book: Windhoek heute - to-day, by Nikolai Mossolow.