Wildlife of the Okavango, by Duncan Butchart 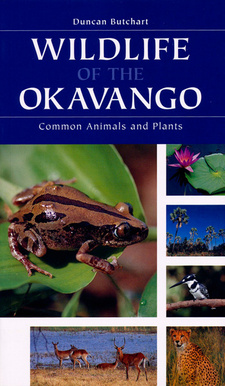 Unlike most rivers, the Okavango - which has its source in the highlands of central Angola - never reaches the sea. Instead it spills out onto the sands of the Kalahari Basin to create an oasis in the desert. The mosaic of channels, islands, lagoons and forests that have resulted support a wealth of wildlife including large carnivores, great herds of elephant and spectacular birds. Duncan Butchart describes it in detail.

This book is intended to fill a perceived niche for a simple, compact guide to the more common birds, mammals, fishes, plants and other forms of wildlife found in the region, and also to emphasise the inter-relatedness of these life forms. It does not attempt to be comprehensive as there already exist a number of publications which focus in detail on individual groups of southern African animals and plants. For similar reasons this is not a 'where to go' book, although a map of the area showing places of interest, is included. For reasons of ecological similarity, the area covered by this guide extends beyond the Okavango Delta to incorporate the Kwando-Linyanti-Chobe wetlands to the north, the Chobe National Park to the east, and the Tsodilo Hills and surrounding broad-leaved woodlands in the west. Many larger mammals - in particular African Elephant and Burchell's Zebra - move on a seasonal basis across this vast region of approximately 120 000 square km. Although abutting the area in the south, Nxai Pan and the Makgadikgadi Pans are not included as the flora and fauna here are markedly different, being typical of the arid Kalahari. Major conservation areas are the Moremi Game Reserve and Chobe National Park in Botswana, and Mudumo, Mamile and Mahango national parks in Namibia. All of these reserves may be visited with four-wheel drive vehicles or, in the case of the first three, as a guest at a private camp. Extensive Wildlife Management Areas (WMAs) -where the utilisation of wildlife, including trophy hunting, is the primary form of land use - exist alongside Moremi and Chobe in Botswana. The Okavango region is populated by an ethnically diverse people, including original Khoisan-speaking inhabitants - the Basarwa - who are now in the minority. Bantu tribes include the Batawana, Hambukushu, Herero and Bayei, most of whom speak Setswana. A small number of people of European ancestry, many of whom are citizens of Botswana, have also chosen to settle in the beautiful surroundings. In East Caprivi, Khoisan-speaking Barekwena are numbered among the diverse population dominated by Bantu-speaking peoples, many being related to the Lozi of Zambia. Recent estimates put the combined population of the Okavango-Chobe-East Caprivi region at about 150 000, with the majority centered in towns such as Maun, Kasane and Katima Mulilo. In the reality of the modern world these people are as much a part of the environment as the wildlife, the future of which lies in their hands. Conservation in Africa will only succeed if local communities are themselves involved in the management of wildlife resources and derive tangible benefits from tourism. In this regard it should be noted that the Moremi Wildlife Reserve was the first of its kind to be established by non-colonial administrators in Africa - the Batawana tribe set aside the land in 1962. No book on the Okavango Delta - not even a field guide such as this - can rightfully ignore the threats which this unique wilderness faces. […]

This is an excerpt from the guide: Wildlife of the Okavango, by Duncan Butchart.

Trees and Shrubs of the Okavango Delta. Medicinal uses and nutritional value

Trees and Shrubs of the Okavango Delta is not only an identification Guide but also explains their medicinal uses and nutritional value.

Common Wild Flowers of the Okavango Delta is not only an identification Guide but also explains their medicinal uses and nutritional value.