Wildlife of South Africa: A Photographic Guide, by Duncan Butchart 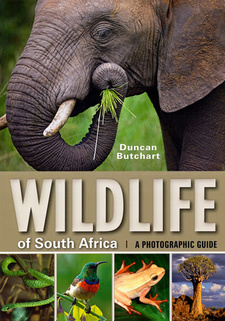 Wildlife of South Africa: A Photographic Guide, by Duncan Butchart.

This compact Wildlife of South Africa is intended as a portable photographic guide for visitors to national parks and other places rich in wildlife.

South Africa is a land of astonishing natural diversity. From the snow-capped peaks in the Drakensberg to the expansive subtropical beaches of Zululand, and from the flower-carpeted semi-deserts in Namaqualand to the moss-clad forests of Tsitsikamma, there is a variety of plants and animals that is unrivalled elsewhere on the continent. The warm, tree-dotted savanna - 'the bush' as it is known to locals - harbours Elephant, Giraffe, Lion, Cheetah and other large mammals, while the Cape fynbos, semi-arid Karoo, Wild Coast and high-altitude grasslands support their own distinct and equally precious wildlife communities. This compact book is intended as a portable guide for visitors to national parks and other places rich in wildlife, as well as to landowners and those who enjoy nature from their own doorsteps. It is not a comprehensive field guide, for several such books are already available on the respective taxa, but rather an introduction to the more conspicuous and interesting mammals, birds, reptiles, frogs and trees of the country. The opening pages provide a brief overview of the South African landscape, climate and wildlife habitats, with a map showing protected areas and localities mentioned in the species accounts. The book illustrates and describes a carefully selected range of species, providing details on their identification and habits. There are also notes on habitat, status and measurements, as well as the best viewing localities for each species. Due to space limitations, some fairly common animals and plants have been excluded in order to provide wide coverage of as many families and groups as possible. Since the book is specific to South Africa, several uncommon yet endemic species such as Riverine Rabbit, Cape Parrot and Sungazer lizard are featured, even though they are rare and difficult to find. These and the many other endemics confined to South Africa are among the top priorities of local conservation groups, as their survival is dependent upon wise and sensitive land management in this country. Pages have been arranged so that similar or related species are placed together for easy comparison, but this has meant that the sequence more typical of comprehensive reference books has not always been followed. Not included are representatives of the enormously diverse insect, spider or other invertebrate groups, or any of the region's freshwater or marine fish. The absence of these smaller creatures notwithstanding, this book is a celebration of the extraordinary biodiversity at this southern tip of the continent.

This is an excerpt from the book: Wildlife of South Africa: A Photographic Guide, by Duncan Butchart.

Baobabs of the World

A photographic masterpiece, this beautiful book is a fitting tribute to the baobab of the world.