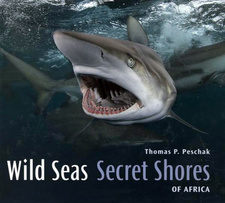 From Thomas P. Peschak's preface: AFRICA ... THE VERY NAME EVOKES IMAGES of trumpeting elephants, roaring lions, and herds of giraffes racing across the savanna. Conspicuously absent are images of sharks stalking enchanted kelp forests, mermaid-like dugongs roaming seagrass beds, psychedelic-coloured fish darting through coral reefs, and sardines, pilot whales and great white sharks traversing vast tracts of open sea. Yet the oceans that border Africa's shores are worthy rivals to the more familiar terrestrial landscapes. The drama of the sardine run matches that of the Serengeti wildebeest migration; the East African coral reefs harbour levels of biodiversity equal to those of the Congolese rainforests; travelling pods of humpback whales are as majestic as the great herds of elephant; and the ocean's great predatory sharks are as impressive and efficient as any lion, leopard or cheetah. Africa's oceans are without doubt amongst the most valuable - and underrated - natural treasures in the world. The African coast twists and turns for over 26 000 kilometres and is bordered by the Atlantic Ocean in the west, the Indian Ocean in the east and the Mediterranean and Red seas in the north - but it has always been the marine realm lying off the continent's southern and eastern reaches that has consistently aroused my scientific curiosity and artistic passion. Between Namibia and Kenya lie two adjacent, highly contrasting marine bioregions: in the west the Atlantic Ocean, driven by the cold Benguela current, and in the east the Indian Ocean, encompassing two warm, fast flowing ocean rivers - the Agulhas and Equatorial currents. Wild Seas, Secret Shores of Africa is a journey that begins with an exploration of the Secret Shores that border these two oceans, from Namibia's windswept Skeleton Coast, where sand dunes plunge directly into the sea, to South Africa's Wild Coast, where waterfalls roar off seaside cliffs, and beyond to the tropical coral beaches of Kenya's Swahili shores. We return to the Atlantic Ocean washing southern Africa's western shores. Here the nutrient-rich upwellings in the Cold Seas nourish an almost unimaginable number of animals and plants. The unrivalled productivity of this region is evident in plankton blooms so dense that the ocean turns dark green, kelp forests fifteen metres tall, stretching uninterrupted for hundreds of kilometres, and the highest concentration of great white sharks in the world. On the continent's eastern shores lies a less productive marine ecosystem, but one that's endowed instead with extraordinary diversity of life. The Warm Seas of the Indian Ocean nurture the coral reefs, sea grass beds and mangrove forests that in turn provide shelter and food to thousands of species of fish and invertebrates. In places, especially along the west coast, a collection of islands, the tips of undersea mountains, puncture the ocean's surface. Once a year they attract a large proportion of southern Africa's Seabirds to breed and raise their young. Beyond both the cold and the warm coastal waters lies the open ocean - a vast expanse of Blue Wilderness, where life's dramas play out in a truly three-dimensional realm, with neither the luxury nor the constraint of a fixed substrate. The final chapter, Close Encounters, explores our own relationship with the sea. (...)

This is an extract from the book: Wild Seas, Secret Shores of Africa, by Thomas P. Peschak.

The striking cover of Currents of Contrast invites the reader to open the book, and to be lost in the various forms of life in southern Africa's two oceans.

A Guide to the Common Sea Fishes of Southern Africa

Practical, easy to use and authoritative guide! More than 300 common sea fishes ot the coastal regions of Southern Africa.

Freshwater Fishing in South Africa is a practical guide for anglers in general, but serves also as a start-up manual.