When Money Destroys Nations, by Philip Haslam and Russell Lamberti 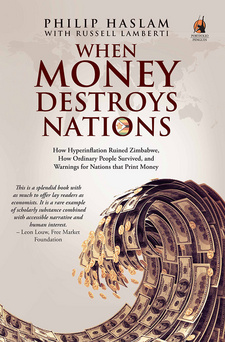 Philip Haslam and Russell Lamberti have produced a fascinating, accessible account of how Zimbabweans actually lived (and died) during the worlds second-highest hyperinflation, one that dwarfed the German hyperinflation of 1922—23. Yes, the peak daily inflation rate in Zimbabwe in November 2008 was 98%, an economic tragedy the authors of 'When Money Destroys Nations: How Hyperinflation Ruined Zimbabwe, How Ordinary People Survived, and Warnings for Nations that Print Money' skilfully bring to life.

by Leon Louw (Executive Director of the Free Market Foundation)

When Money Destroys Nations is a splendid book with much to offer lay readers as economists. It is a rare example of scholarly substance combined with accessible narrative and human interest. It explains much more than hyperinflation. Readers experience a roller-coaster ride through the ghastly horrors inflicted on entire populations by central bankers and politicians who use money to become diabolical oppressors. It provides disturbing insights into ominous parallels between Zimbabwe's hyperinflation and profligate polices that have become increasingly trendy in supposedly responsible countries, including the USA. It is hard to believe that such manifest madness happens at the behest of seemingly intelligent people. My colleague and friend, economist Vivian Atud, read the manuscript and said, 'The book is an easy read for people in all walks of life/ She was especially taken by the observation that governments have power and can choose to manipulate monetary policy. However, they have no power or ability to manipulate the outcomes of their policies.' The book has touching stories of how communities rallied to support destitute compatriots, how expatriates sent money and essential supplies to friends and relatives, and how trade was forced back to primitive barter. Tampons and toiletries, like much else, were scarce and used as currency substitutes. Zimbabwe's hyperinflation was much more devastating than its liberation war or the oppression from which it liberated them. The book warns, often with Socratic and rhetorical questions, that money mischief is not easily understood, even by supposed experts. Ingenious disinformation and obfuscation deceives people into thinking perpetrators are rescuers. The US government's profligate response to their government-induced subprime banking crisis, and the responses of Southern European governments to their 'sovereign debt' crisis are prime examples. If this book is read by all who should read it, it will promote a substantially better-informed climate of opinion. Readers will be enriched by an appreciation of inflation as a form of taxation at best and plunder at worst. Hyperinflation is hyper-plunder of virtually all wealth. If more people understand a few basics, the propensity of central banks and governments to confiscate wealth by eroding currency values will be constrained. The book explains why the difference between inflation and hyperinflation is a matter of degree not principle; that the lesser of evils is still evil. The penultimate section presents a compelling, if contentious, thesis to the effect that the Zimbabwe tragedy might be a portent of things to come elsewhere. It has a critique of US dollar dominance and of dangers emanating from exuberant confidence in the established view regarding inflation policy. The proposition that there is a serious risk of global hyperinflation, or at least US dollar hyperinflation, is not far-fetched. No lesser paper than the liberal Washington Post laments similarities between past hyperinflations and US monetary policy. It anguished about what great hyperinflation episodes ... tell us about the Fed'. In the opposing ideological corner, the leading conservative-libertarian publication, Forbes, suggests that US hyperinflation might be 'imminent'. Having alerted readers to the economic crises that might lie ahead, the book ends on a positive note with ideas on what individuals and governments can do to avoid or ameliorate hyperinflation. Much can be learned by readers 'in all walks of life', as Vivian Atud suggests, from ordinary folk to people who influence the course of events. It is clear from the book, When Money Destroys Nations, that every potential reader is one of the former and can be one of the latter.

This is an excerpt from When Money Destroys Nations: How Hyperinflation Ruined Zimbabwe, How Ordinary People Survived, and Warnings for Nations that Print Money, by Philip Haslam and Russell Lamberti.