What's that Reptile? A starter's guide to reptils of southern Africa, by Johan Marais 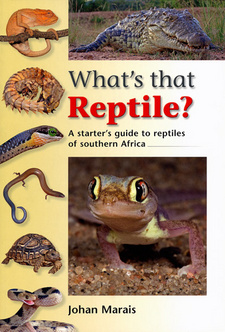 What's that Reptile? A starter's guide to reptils of southern Africa, by Johan Marais.

What's that Reptile? encourages starters first to study reptiles of southern Africa in their broader natural groups before taking them to the next stage.

What's that reptile? introduces beginners to the diverse reptile fauna of southern Africa, including its snakes, lizards, crocodiles, tortoises, terrapins and turtles. The book encourages readers first to study reptiles in their broader natural groups before taking them to the next stage of identification, namely the species. The text is simple and accessible, giving helpful information on the appearance, distribution, habitat, behaviour, diet and breeding habits of species. Interesting fact boxes and an abundance of clear, colourful photographs bring these remarkable creatures vividly to life. Southern Africa is the ideal environment for a budding reptile enthusiast, as the area has such a rich and diverse reptile fauna: to date there are 517 described species, including more than 150 snakes and around 338 lizards. In recent years, DNA analysis has assisted scientists in clarifying the validity of several doubtful species, and this has resulted in many new species being described. This work is ongoing, and the total number of known reptiles in southern Africa could soon exceed 600. This book covers some of the most commonly encountered, interesting and unusual species occurring in the region. Its aim is to encourage you to study reptiles in broad groups before attempting species identification. Although most people can recognize a reptile when they see one, reptiles in fact do not have particular characteristics that set them unambiguously apart from all other vertebrates. Generally, scientists distinguish reptiles by their:

This list (and its exceptions) shows just how difficult it is to define the characteristic features of this group. Within the reptile class there are also some surprises. Reptilia currently includes five orders, of which three are represented in southern Africa:

Strictly speaking then, snakes should be seen as a group of specialized lizards. However, this book follows the popular perception of reptiles by treating snakes and lizards separately. To assist you in the first steps towards identification, reptile species are discussed in groups based largely on common behaviour or habitat, similar appearance, or family relationships. However, the real relationships between different reptile species can be startling. DNA analysis has revealed, for example, that both crocodiles and birds descended from the archosaurs and are, therefore, more closely related to one another than to any other animals. Furthermore, some of the lizards that are closely related to snakes form part of the Venom clade' and are technically venomous. Though they lack a snake's fangs, their salivary glands produce mild venom that is of no consequence to humans. These lizards include, among others, agamas, monitor lizards and even chameleons. (...)

This is an excerpt from the book: What's that Reptile? A starter's guide to reptils of southern Africa, by Johan Marais.