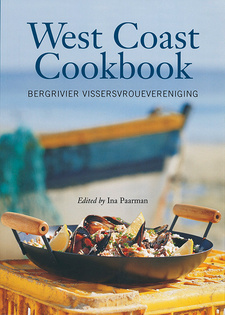 Ina Paarman is one of South Africa's most well-known and loved food writers and television personalities. She is the author of many successful cookery books, including the West Coast Cookbook.

The Bergrivier Vissersvrouevereniging was established in 1996 by a group of women from traditional fishing communities along the Cape West Coast as an empowerment project for people who led a hand-to-mouth existence. These wives and widows of pelagic fishermen were awarded a fishing quota and although they possessed no boats of their own, they approached others to fill their quota in return for a percentage of the 'catch'. The small income received was ploughed back into the company to facilitate further projects, of which The West Coast Cookbook is an example. It was a beautiful autumn afternoon on the West Coast when we conceived this project over coffee, scones, cheese and jam with the special ladies of the Saldanha Branch of the Bergrivier Vissersvrouevereniging. For the International Ocean Institute, Southern Africa (IOI-SA), it was a delight and an honour to assist the Vereniging with the creation of development projects. The goals of the Vereniging are noble and important, as well as an example of what empowerment and corrective action are all about. Saldanha is steeped in an almost secret, but enormously rich, culture and tradition that was marginalized for most of history. As with the sense of smell and memory, food and cultural history are closely linked and thus the idea for this project was such a natural one, that it almost had to happen. The enthusiasm of Ina Paarman was a major boost for us all and we are grateful and very proud of the results. Our personal history in Saldanha and the West Coast, combined with our love for the sea and its fresh bounty, have made this a meaningful endeavour indeed. IOI-SA is situated within the Department of Biodiversity and Conservation Biology at the University of the Western Cape. Its involvement in sustainable livelihood initiatives resulted in our participation in this project, the fruition of which was possible with the generous assistance of many dedicated people to whom IOI-SA expresses its utmost gratitude. Good luck and enjoy the food!

Example: Snoek over the coals

This recipe, from Cecil Stoffberg, has for many years provided a popular, inexpensive, yet delicious meal. The apricot sauce is marvellous and very typical of the West Coast. 8-10 servings

Cut the ready-salted snoek into portions and sprinkle with pepper. Heat the ingredients for the basting sauce of your choice over low heat and mix well. Using a small brush, brush the fish with the sauce. Braai the fish over glowing coals – the coals must not be too hot – until the fish comes easily off the bone. Serve with fresh bread and a salad, or a toasted tomato and onion sandwich.

Variation: The snoek may also be baked in the oven, with either of the basting sauces.

Hint: Inexperienced braaiers will find the mayo basting sauce easier and they can be sure that the cooked fish will be tender and juicy without the danger that it will burn. The flavour of the apricot basting sauce is delicious, but one has to take care that it doesn’t burn. Make sure the heat from the coals is moderate.

This is an excerpt from the cookbook: West Coast Cookbook, by Ina Paarman.

The new edition of the West Coast Cookbook captures the essence of a great South African culinary tradition.

Cook with Ina Paarman changes cooking to a rewarding pastime with over 200 South African recipes.

Relish. Easy Sauces, Seasonings and Condiments to Make at Home

Relish is a cookbook that aims to bring flavour into daily cooking and helps to make easy sauces, seasonings and condiments.