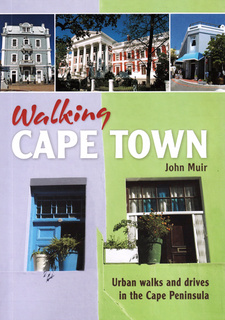 For locals and visitors wanting to discover more about the city’s rich heritage, John Muir's new book Walking Cape Town is an indispensable guide to walks and drives in the Cape Peninsula.

South of Sea Point are the fashionable seaside resorts of Bantry Bay and Clifton. Beyond Clifton and its famous four beaches is palm-tree-lined Camps Bay. A few decades ago, this was a sleepy village with a few shops, including a chemist and a grocery store ... and a resident white horse called Philly who used to munch the grass of the local soccer field. In the last 40 years or so, Camps Bay has grown into a busy, cosmopolitan seaside resort where every available space has been developed. Start at the cannons (1) on Lower Kloof Road, below Camps Bay School. This fortification was erected by the Dutch in 1782. There was concern that Camps gay Beach would provide a possible landing site if the Cape were invaded by a foreign power. As you look back towards Cape Town, you can see the Clifton Scenic Reserve stretching down to the sea from Victoria Road. Another area of natural vegetation runs up from Victoria Road, across Kloof Road and onto the slopes of the Lion's Head. This gives you an idea of what the area looked like before the intensive building development took place. Victoria Road, named after the British queen, was built as the coast road from Sea Point by road engineer Thomas Bain. The extension of the route south to Hout Bay was completed in 1888. As you come down the slope to Victoria Road, look out for the two metal pole bases next to the stone retaining wall along the pavement. These were poles (2) that supported the tram cables for the Camps Bay Tramways Company. In 1900 a syndicate was formed to develop Camps Bay as a residential area. To facilitate convenient transport access, a tram system was envisaged, running from Cape Town to Camps Bay Beach. The syndicate bought all the vacant land, mainly farmland, in Camps Bay between the sea and the mountain, and had it subdivided into building plots. In 1901 three companies were registered - the Camps Bay Tramways Company, Oranjezicht Estates Company and Cape Marine Suburbs Limited. In November 1901, the first tram made the journey along Kloof Road to the beach front at Camps Bay. The secretary of the company was James Farquhar, a strong-minded man who was determined to market Camps Bay as a holiday resort as well as a desirable place to live. The planting of palm trees along the beach front was one of Farquhar's ideas. A second tramline climbed over the Kloof Nek pass to the west of Table Mountain, which was a major engineering feat. It opened a year later. Continue along Victoria Road to reach the Theatre on the Bay (3) in Link Street. Part of the theatre incorporates walls that once housed the engine room of a power station. The Camps Bay syndicate had built this to provide electricity for the tramway. At one stage, the theatre was the Alvin Cinema, then the Phoenix Theatre, used by a local amateur dramatic group, until it was damaged by fire and relaunched as the Theatre on the Bay by theatre impresario Pieter Toerien. As part of the plan to entice visitors to the seaside by showing them how close Camps Bay was to the city, the syndicate also built a covered swimming pool with warm water heated by the power station. Opposite and behind the police station, a portion of these old swimming baths (4) can be seen. (...)

This is an excerpt from the book: Walking Cape Town: Urban walks and drives in the Cape Peninsula, by John Muir.

The perfect companion for the urban sightseer, Walking Cape Town features 33 easy urban walks and drives in the Cape Peninsula.

These are 30 best walks and hiking routes in the Cape Peninsula to particular points of interest, tested and described by Mike Lundy.