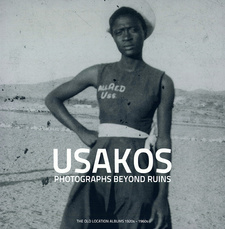 In 2012 Paul Grendon, Giorgio Miescher, Lorena Rizzo and Tina Smith visited Usakos, a small town in central Namibia half way between the capital Windhoek and Swakopmund on the Atlantic coast, with a view to doing a series of interviews with local residents. At the time their main interest had been in the town's history, notably its importance as a former railway centre and the implementation of spatial segregation and apartheid urban planning in the period between the 1920s and the 1960s. The project "Usakos: Photographs Beyond Ruins - The Old Location Albums 1920s-1960s" was a secondary effect of this meeting.

This is the context in which we were introduced to four female senior members of the community, Cecilie //Geises, Wilhelmine Katjimune, Gisela Pieters and Olga //Garoes, all of whom were said to have rich knowledge of Usakos' past. During the many conversations we had with the women, they began to share their photographic collections and personal archives with us. The present exhibition and catalogue are based on our interaction over a period of several years, in the course of which we selected photographs, produced high quality scans and prints, and identified people and sites in the images. Cecilie //Geises, Wilhelmine Katjimune, Gisela Pieters and Olga //Garoes collected and preserved a remarkable and diverse corpus of photographs, some of which date as far back as the early 1900s. While the collections kept by the women cover a wide range of locations, time periods, genres and subjects, one of the centrepieces of their archives consists of those photographs that relate to the old location of Usakos and, accordingly, to the period between the late 1920s and the early 1960s, when the South African apartheid administration forcibly removed residents to new townships across the Onguati river. These forced removals are remembered today as one of the most disruptive and destructive experiences for the town's African population. It is a strong sense of loss, of homes, neighbourhood, deceased friends and family, that informs and explains the women's strong emotional attachment to the photographs and helps foster nostalgic narratives of the past. But as much as these personal archives resonate with a time and place gone by, they are equally part of the women's engagement with their present and future prospects. Notably to this day, Cecilie //Geises, Wilhelmine Katjimune, Gisela Pieters and Olga //Garoes continue to collect, curate and archive photographs, thereby bearing witness to a deep concern with and sensitivity for an ongoing, visually mediated dialogue between the past, the present and the future. Many members of the Usakos municipality backed the project in different ways, but we would like to especially thank Izak Izaaks and Saara Ilovu. Pastor Andreas Apollus of the local Evangelical Lutheran Church of Namibia has been a welcoming host and generous facilitator. The present exhibition and catalogue would like to be perceived as an invitation to trace private archives and collections kept by men and women across Namibia - and Southern Africa - and to engage with the diversity and richness of cultural and aesthetic practices in the region. These collections and archives enrich the landscapes of historical knowledge production; they disclose subjective representations and interpretations of the past and thereby nuance our understanding of Namibia's experience of colonialism and apartheid rule. The case of Usakos evidences, also, that key themes in Southern African urban history can and need to be explored in minor towns as much as in the main cities such as Windhoek, Cape Town or Johannesburg. [...]

This is an excerpt from the photographic collection: Usakos: Photographs Beyond Ruins, by Paul Grendon, Giorgio Miescher, Lorena Rizzo and Tina Smith.

The photographic collection "Usakos: Photographs Beyond Ruins" consists of images taken from albums of old location inhabitants of the 1920s-1960s.

Gender and Colonialism: A History of Kaoko in North-Western Namibia 1870s-1950s

Gender and Colonialism: A History of Kaoko in North-Western Namibia 1870s-1950s is an attempt to convey a multi-faceted history of a region that has only recently been tied into a national historiography.

'New Notes on Kaoko' questions the myth of Kaoko, an image of the region as isolated and exotic, through written texts and also through an examination of photographs.

African posters. A catalogue of the poster collection in the Basler Afrika Bibliographien

The catalogue of African posters collection is one of several special collections in the Basler Afrika Bibliographien.