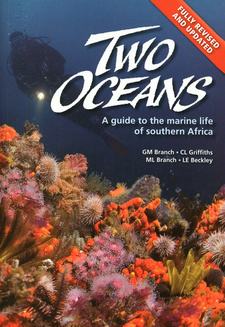 Exuberant in colour and bursting with life, Two Oceans captures the diversity of the rich marine life heritage of South Africa and is written by the reknown scientists George Branch, Margo Branch, Charles Griffiths and Lynnath Beckley.

This new edition of Two Oceans is a complete revision that incorporates 522 additional species, updates biological information, distribution records and scientific names, and has benefited from the digital era, with more than half the photographs being replaced and improved. About 900 species of birds are found in southern Africa and more than 15 guidebooks are available to identify them. By contrast, there are over 12 000 described species of marine plants and animals in the region, but this is the only field guide currently available that can be used to identify species for the entire region across all major groups of this diverse biota. JH Day's A guide to marine life of South African shores broke new ground when it was published in 1974, but it is no longer available. The living shores of southern Africa, first published in 1981 to communicate the exciting research done on marine life in the region, was not designed as a field guide. Two Oceans serves precisely this purpose: to allow the ready identification of the most common forms of marine life that inhabit our coasts - including invertebrates, fish, reptiles, birds, mammals, algae and flowering plants.

Southern Africa (defined here as stretching from northern Namibia to central Mozambique) has a particularly rich marine fauna and flora, with over 12000 species, or almost 6% of all the coastal marine species known worldwide. About 33% of these are endemic, occurring nowhere else. Given this rich assemblage, it is impossible to cover every species in one book. Instead, we have focused on the most frequently encountered species, particularly those that live in the intertidal zone and in shallow waters readily accessible to beachcombers and scuba divers - in estuaries, and on beaches, rocky shores and dunes.

Similarly, not all groups of animals or plants are covered in the same depth. The emphasis is placed on those groups that are diverse, frequently encountered, and poorly covered in other field guides. The coverage of birds is limited to those seen near the coast or in estuaries. Selecting which fish to feature was another difficult task and we have focused on those species commonly seen in tidal pools, by divers, or frequently caught by anglers. Special attention has been given to the smaller rock-pool fish that have been under-represented in other popular field guides.

How to use this book:

The outline of contents on pp. 4-5 includes a pictorial guide to the major groups of animals and plants featured in the text. In the sections dealing with each of these groups there is also a brief introductory paragraph outlining the characteristics and key features used to identify the species. We have kept technical terms to a minimum, but where these are necessary they are defined in the introductory paragraphs, and the Glossary. Almost all of the species are illustrated with a colour photograph. In some cases, line drawings show details necessary for species identification. On the page facing the photographs, each species is described, paying particular attention to the key features used to identify it. Also given are:

Size: An indication of the size a species normally achieves (in millimetres, centimetres or metres, depending on how big the species is).
Biology: Notes on where the species can be found, its diet, any relationships it has with other species, and other interesting aspects of its biology.
Maps: These accompany the text for most species and show their geographic range. Those that reach the northeastern limit of the map almost all extend into the tropical Indo-Pacific, whereas relatively few reaching the northwestern limit extend into tropical Angola. The word 'Alien' on a map indicates an introduced species.
Similar species: Where there are two or more easily confused species we use this section to provide information on how to distinguish them, or to give brief notes on species that could not be accommodated as full entries.

To identify an animal or plant, first compare the specimen with the photographs: species with similar features have been grouped together to simplify such comparisons. Having matched the specimen with a photograph, read the accompanying text to check if it fits the description. Also check the 'Similar species'. Resist the temptation to 'force' a name onto an animal or plant if it does not conform to the description: sometimes you will have found species that are not included in the guide, or that may be new to the region or even to science. For those enthusiasts wishing to pursue such rarities further, detailed scientific monographs on particular groups are listed in the References. […]

This is an excerpt from the book: Two oceans: A guide to marine life of South Africa, by George Branch, Margo Branch, Charles Griffiths and Lynnath Beckley.