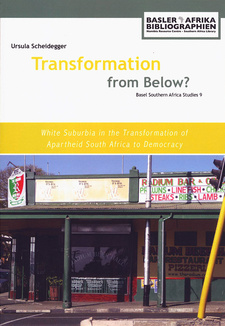 From Ursula Scheidegger's study, Transformation from Below? White Suburbia in the Transformation of Apartheid South Africa to Democracy, the following expert introduces to social dynamics in two formerly white Johannesburg neighbourhoods.

South Africa is an example of a relatively successful transition from an authoritarian regime to a liberal democratic state. Comprehensive change of the political system was attained without the breakdown of law and order, the destruction of institutional capacity or the loss of state control. After the transition, procedural democracy has improved, and economic activity has modestly expanded. Social organisations and networks were important agents in this process; they offered structures of interest aggregation and political mobilisation. In addition, social networks substituted dysfunctional state provision to discriminated population groups. The outcome of the political, economic and social transition was shaped and determined by the resources and opportunities available to the various competing social structures and their embeddedness in the legal, institutional and political context (Boix and Posner 1998, Diani 2001, Evans 1996, Nordlund 1996, Woolcock 1998). In the new political and institutional settings of post-apartheid South Africa, the consolidation of democracy depends on the transformation ability of social groups and networks as well as the state s capacity to address the grievances that prompted transition. In the context of this book, transformation refers to the adaptation of individuals and social groups to the various changes resulting from the political transition in South Africa. Political and legal equality transforms social hierarchies and the access to power, opportunities and resources. It affects social relations between population groups that used to interact in a context of domination and subordination with specific privileges, rights, opportunities and burdens attached to their respective statuses. Hence, transformation requires previously privileged and disadvantaged population groups to respect one another as equal partners in social interactions and development processes. However, social interactions occur in a context where the various population groups not only have different priorities, demands and concerns, but also where skills, organisational and political experience and access to resources and social networks are unequally distributed due to the legacies of apartheid. Political transitions are times of opportunity but are also characterised by uncertainty, instability, asymmetric risk and benefit distribution, power vacuums, political mobilisation and high emotions. In South Africa, social movements were not only instrumental in initiating and sustaining the transformation process and offering support structures, they also provided the breeding ground for the new political leadership. The liberation movement generated a sense of solidarity that was enforced by the discontinuities in the daily lives of people engaged in the liberation struggle. Nevertheless, the different social groups and organisations also changed during the liberation struggle and the transition. Strategies for promoting or preventing change varied considerably between population groups and their social networks. The result was either different levels of adaptation, integration and accommodation of the new social order or contestation and rejection of the changes. The first democratic elections marked the end of the political transition, but social relations are affected by the past, so the democratisation did not eliminate systemic and structural inequalities and oppressive social hierarchies (Taylor 2003:354). Nevertheless, the democratisation process in South Africa changed the relations between the different population groups in a complex and far-reaching way, rearranging structures of power, access to resources and opportunities, social hierarchies and values. Citizens and social groups had to reassess and redefine their roles to engage with the changing political context and the economic, social and psychological adjustments it caused. [...]

This is an exerpt from Transformation from Below? White Suburbia in the Transformation of Apartheid South Africa to Democracy, by Ursula Scheidegger.

Transformation from Below? White Suburbia in the Transformation of Apartheid South Africa to Democracy shows how different ‘communities’ at local level have reconfigured their relationships and interests in South Africa since 1994.