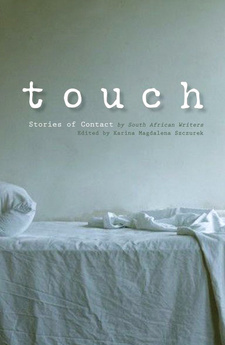 Touch. Stories of Contact is a collection of innovative stories that deal with touch in a physical and emotional sense, written by South African writers and edited by Karina Magdalena Szczurek.

The morning after the argument, she woke early and knew she wouldn't sleep again. Andrew was curled away from her, very much on his side of the bed. She got dressed and stood for a long moment, looking at the bony shape of his shoulders, the dark outline of his head. Then she went out and down the steps to the beach. It was just after dawn; nobody else was around. High up above, the roofs of the town caught the light, but down at the shore everything was in shadow. The tide was far out, leaving a cryptic calligraphy of swirl-marks and debris on the sand. She found herself wandering north, to where the beach was closed off by a headland. It was the sort of point beyond which Andrew wouldn't go, because who knew what might happen on the other side, away from order and civilised eyes? But the view past the promontory was inviting: a narrow strip of sand, edged by cliffs, with a complexity of boulders at the far end. When the water was high, you might not be able to get around, but now, with the tide out, it was easy. She meant only to go a few steps but, partly to defy her sleeping husband, she went further. And then there was no point in standing still, with nothing to obstruct her on the vacant white sand. She felt freer, lighter, than she had in days, and it was only when she got to the far end of the beach that her thoughts became tangled again. Perhaps it was because the pinkish rocks were so dense and slippery, or the cliffs suddenly so raw and close, but she felt plunged again into the thickets of last night's argument. It hadn't been a big fight - they'd had worse, but it was especially painful because it was the first one since the wedding. Since they'd set off on their honeymoon a couple of weeks before, she'd been full of doubts about what she'd done. Or maybe it was more accurate to say that her doubts had become visible to herself. It wasn't anything that Andrew did exactly; though she found him cautious and irritatingly conservative. He was fine as long as he was staying in luxurious accommodation, that Had in Marrakech, for example, but the moment they left the beaten track his anxiety became more voluble. Everything was suspect, too dirty or untrustworthy or expensive. She found this difficult to cope with, but she could hardly claim that it came as a surprise: they'd been living together for three years already. It had been her idea to visit Sidi Ifni, the little town at the top of the cliffs. She'd especially wanted to return here because of the memories it held for her from a previous trip, eight years ago. But that was a different journey, with a different man, part of a youth and a past that were supposed to be behind her. On that occasion she and Mark, her boyfriend at the time, had continued southward, into the bleached emptiness of the Sahara. She knew already that there would be no visit to the desert on this trip. Andrew had tried to like the town at first. He was an architect, and the Spanish Art Deco of the streets around the plaza had perked him up a bit. But she could see he was alarmed by their hotel, although it was also, at least in part, in the Art Deco style. The place was run down, she had to admit. But that was what she liked about it, the seedy ghost of old grandeur. [...]

This is an excerpt from the book: Touch. Stories of Contact, by Karina Magdalena Szczurek.